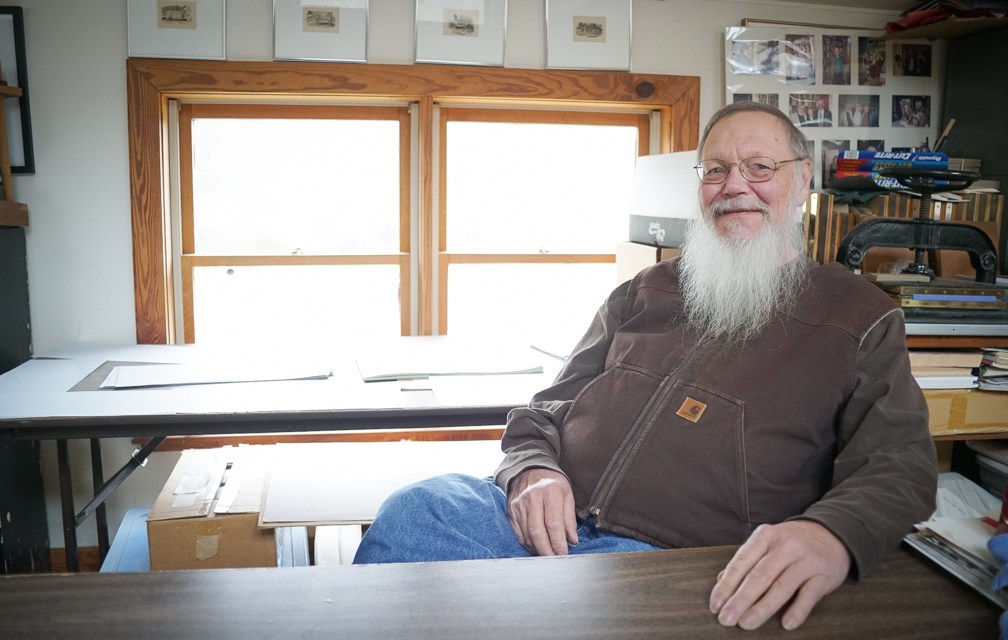 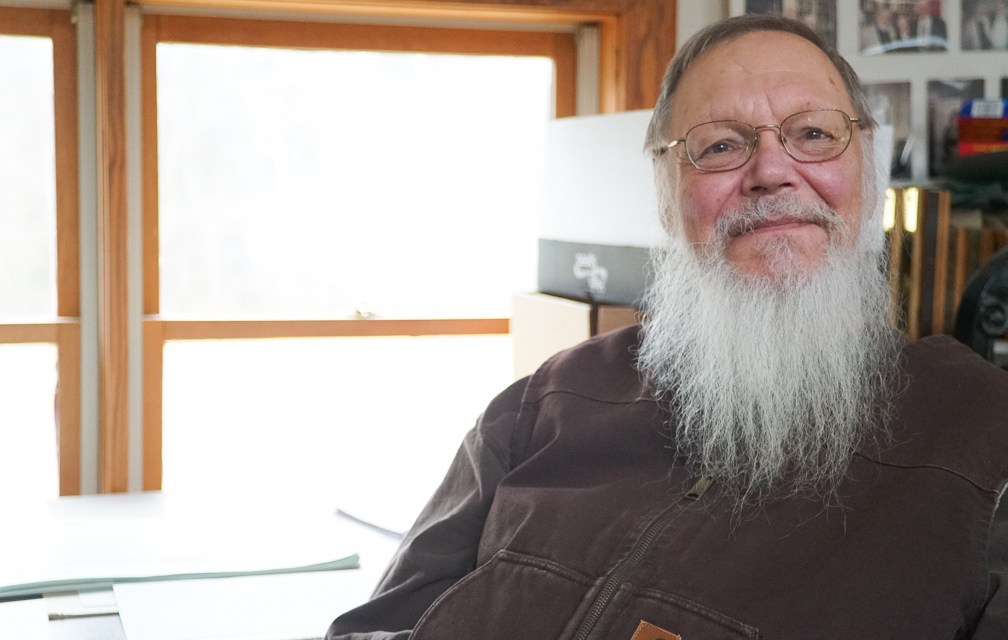 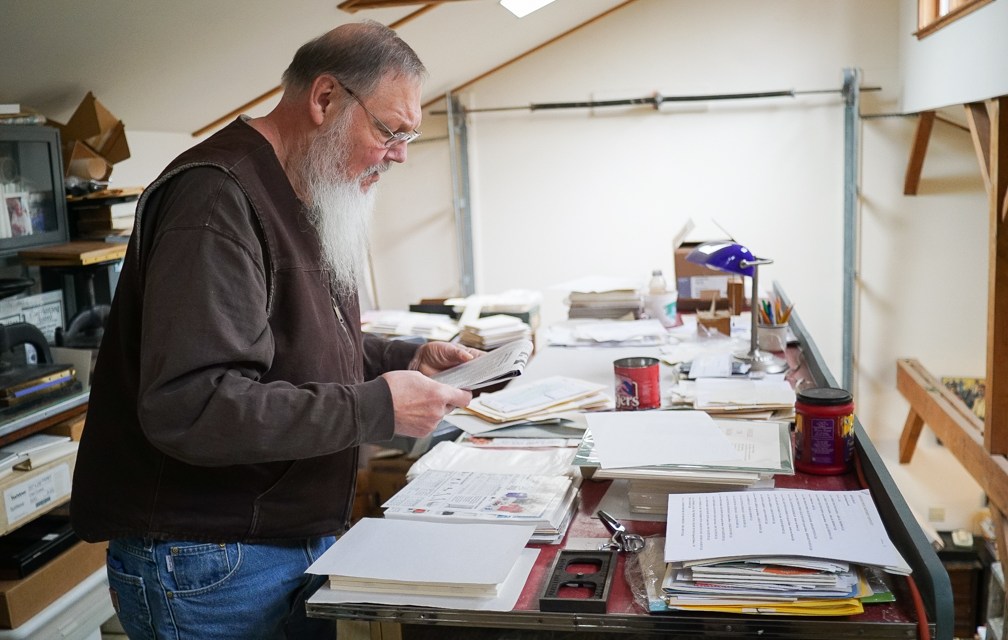 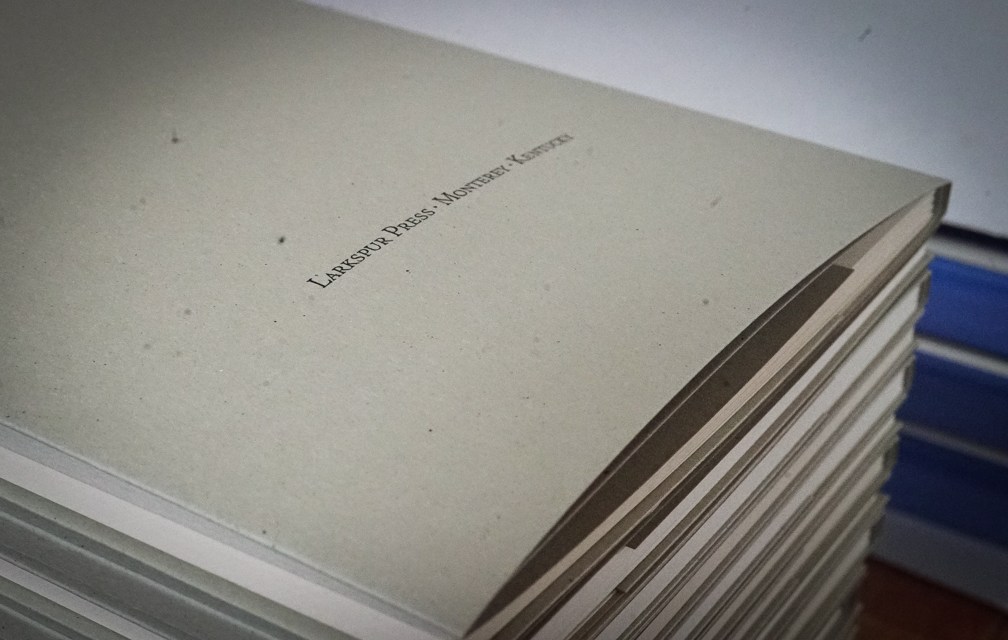 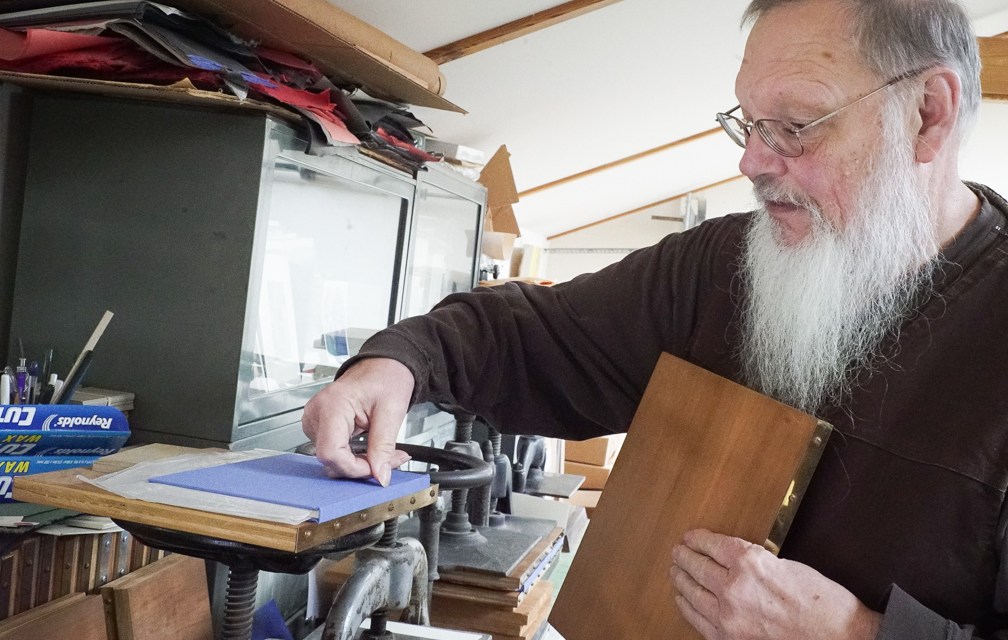 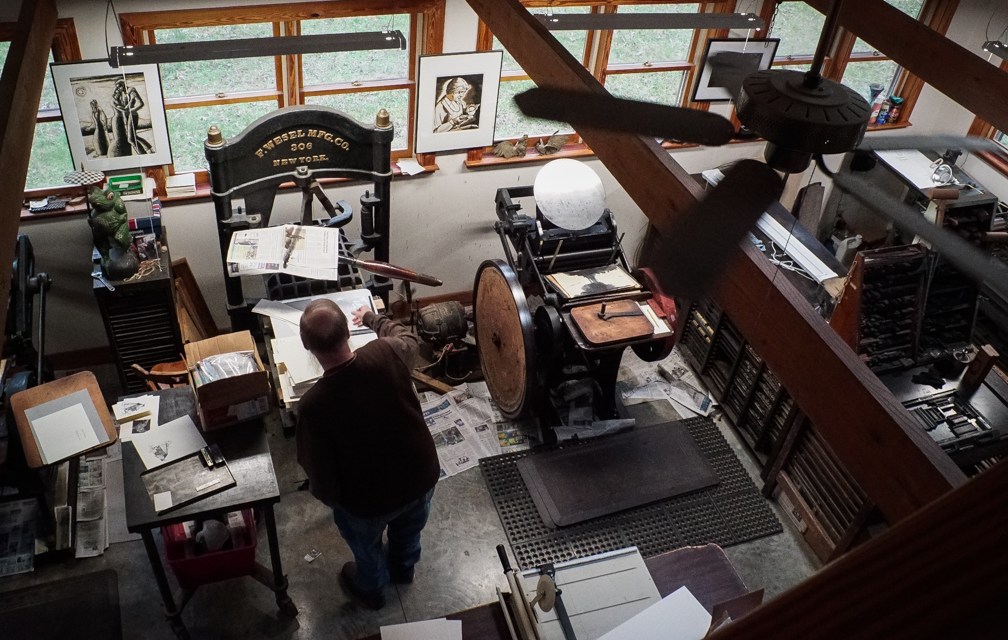 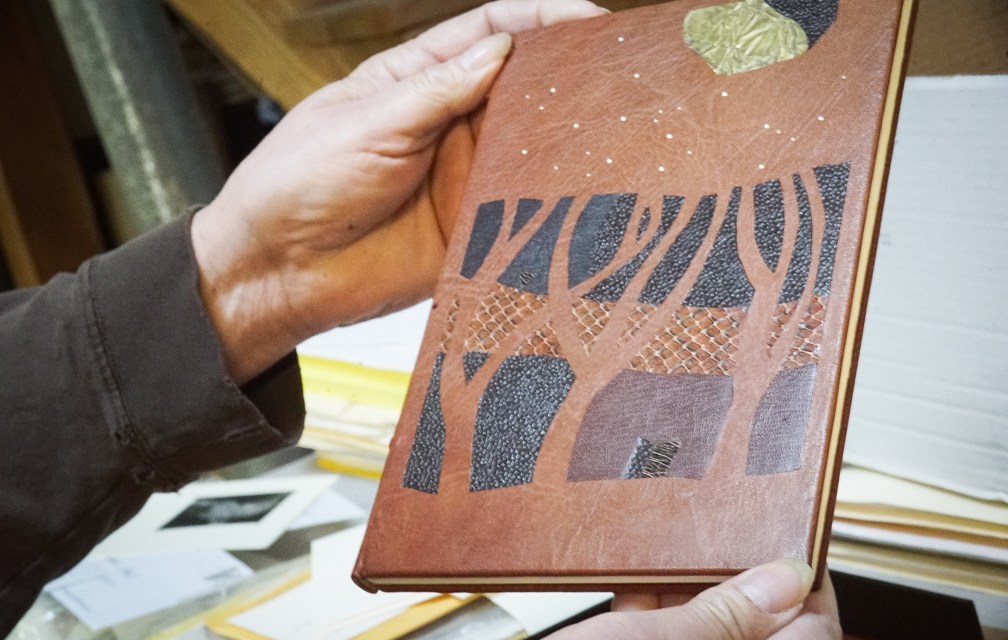 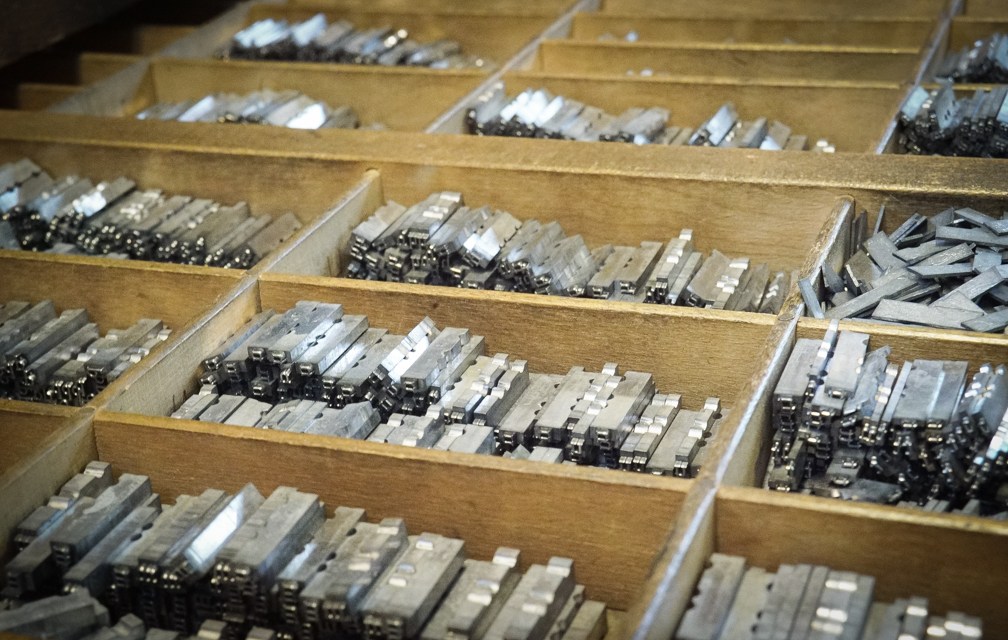 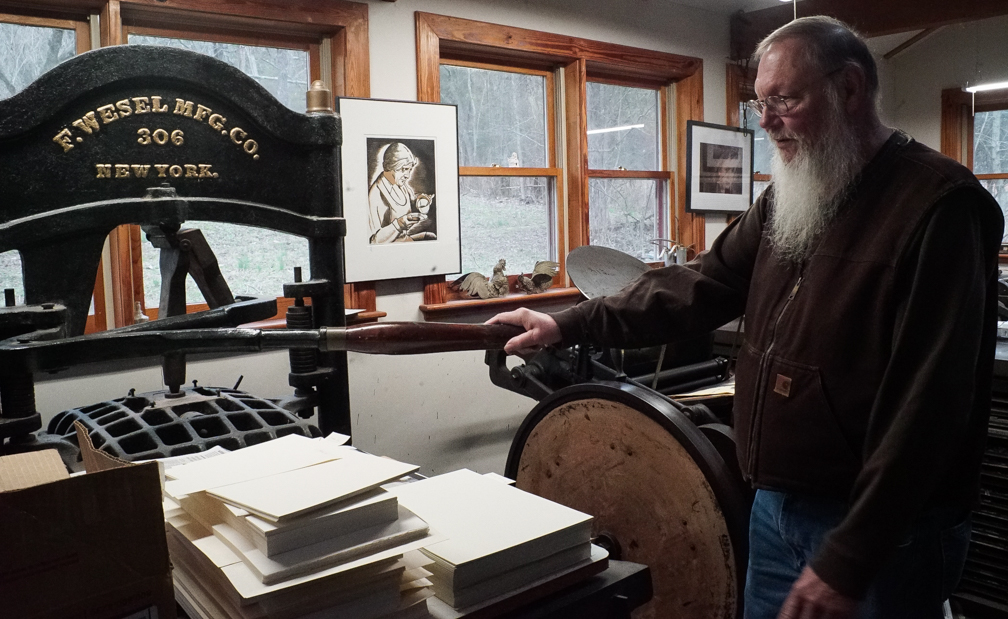 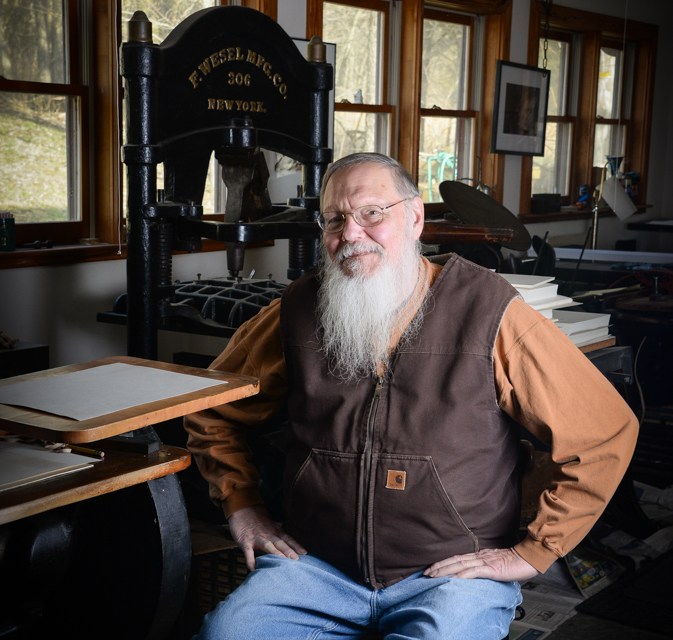 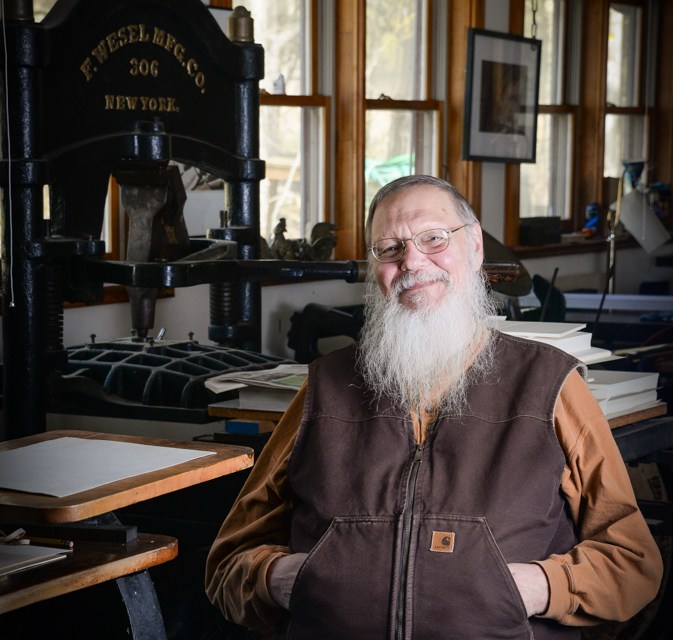 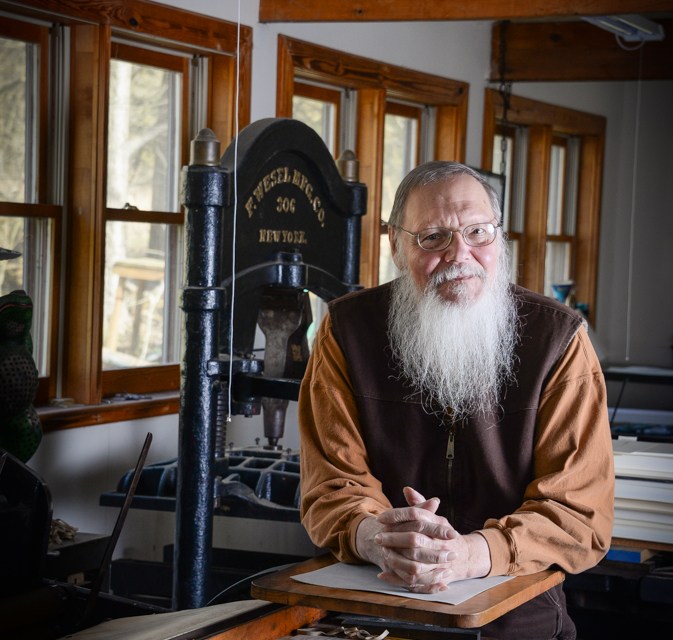 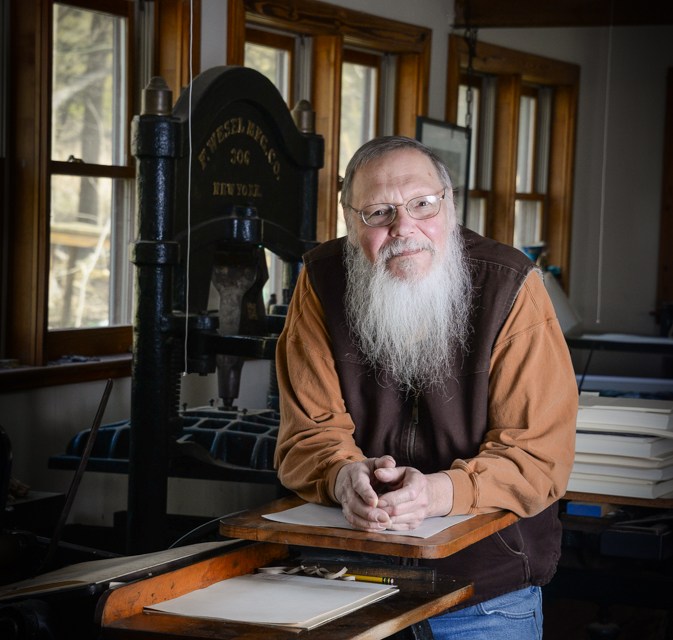 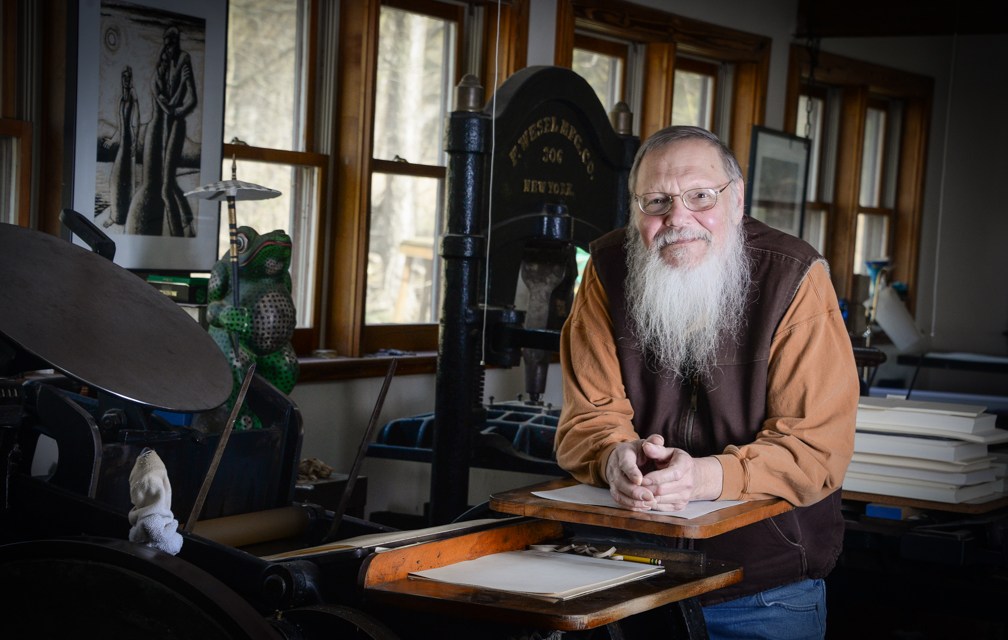 Gray Zeitz, owner and operator of Larkspur Press in Owen County, knows the feeling. Now in his 46th year of business, Zeitz’s printing services are so in demand that he has a two-year backlog of projects.

It wasn’t always this way.

After growing up in Elizabethtown, Zeitz attended the University of Kentucky, where he apprenticed under Carolyn Hammer at King Library Press. As he was learning to hand set type on letterpresses, he heard of a burgeoning crafts movement in rural Monterey, Kentucky. In 1974, Hammer gave Zeitz a small Chandler and Price letterpress machine and he moved to Monterey to start his own printing press.

Zeitz got married and did farm labor to pay the bills. As he continued to perfect his craft of handset printing, he and his wife raised tobacco and baby calves. After nearly a decade, Zeitz was able to support them full-time with the printing press.

It was a tumultuous time culturally and he wanted a name for his business that would stand the test of time rather than be associated with any incendiary political manifesto. During college, Zeitz lived near a hill covered in blue and white Larkspurs, so he chose the flower’s name for his business.

In 1990, Zeitz moved to a farm outside Monterey and built a two-story structure to house his printing facility. Today, the rustic building is nestled between his purple house and a flowing creek. Inside, it’s cluttered with old letterpress printers, shelves of movable type pieces, stacks of paper and tomes of poetry and short stories.

“Everything is done right here in this shop,” Zeitz said.

Larkspur is a publisher as well as a printing facility. Zeitz reads manuscript submissions, primarily poetry, and decides whether to accept them.

“I have to turn down many, many really good manuscripts,” he said.

Due to the volume of work, he decided several years ago to publish only Kentucky authors.

“I’ve got too many good manuscripts from Kentucky writers and we only do three or four books a year.”

What is Zeitz’s criteria for accepting a book? “If I like it and if I have time to do it,” he said simply.

Once he accepts a project, it can take up to a year to complete. In that time, Zeitz pairs the author with an illustrator, does preliminary design, picks a typeface and “proofs the daylights” out of the book. Then he handsets every single page.

Zeitz only selects projects he’s confident have a chance of making back his investment in them. “For each one, depending on the book, I probably have $8,000 to $18,000 dollars in it,” he said. “If I make any money on it, it’s because I sell it. Some authors I know will sell more.”

Zeitz said authors can also pay him to craft and print their book, but he discourages it. “Sometimes I take on a commission for a book, but it’s expensive,” he said. “When someone approaches me for that, I try to talk them out of it just to impress on them what they’re asking, and for them to understand that they may not ever get their money back.”

Zeitz acknowledges that publishing any book requires a substantial investment of money, time and effort. He couldn’t do it alone. His friend, Leslie Shane, helps him run the business, handling typesetting and the bulk of book binding. She also wrote and published her own book of haiku. Zeitz and Shane also work with Cincinnati-based Carolyn Whitesel, who makes decorative papers for special edition books.

In addition to publishing and printing, Zeitz sells books in sheets for book binders who often create exquisite leather bindings with special cases. Zeitz may sell a book for $150. After a binder adds their work to it, they may be able to sell it for $2,000. “It’s a one of a kind piece of art,” Zeitz said. “The price reflects that.”

Larkspur sells its products through mailing lists and bookstores. In Frankfort, Larkspur books can be found at Poor Richard’s Books and Capital Gallery of Contemporary Art.

“It’s a real joy to feel a handmade item rather than a manufactured book,” said Lizz Taylor, owner of Poor Richard’s. Taylor has known Zeitz since he printed in Lexington and has sold his books since she went into business more than 30 years ago.

“They’re works of art, which is why we have them in an art gallery,” said Ellen Glasgow, owner of Capital Gallery of Contemporary Art. Glasgow has carried Larkspur products since she opened her gallery 37 years ago. “We treat them like one of a kind things, which is what they are.”

In March 2019, the television show CBS Sunday Morning aired a feature on Larkspur Press. Glasgow said that after the show aired, sales of Larkspur’s books increased and every order came from outside of Kentucky and the U.S.

“People are thrilled with the whole idea that it’s handmade and hand printed,” Glasgow said. “There are so many things that make it special. They’re just delicious.”

Glasgow pointed out the singular care that Zeitz puts into each book. “He sets one letter at a time, pulls sheets one page at a time, does every stitch on the binding one at a time,” she said. Her customers often have trouble grasping how rare and exclusive Larkspur’s products are.

“When a book is sold out, he doesn’t print another edition,” Glasgow said. “It’s over.”

For his part, Zeitz is content to keep busy printing books on his farm in Owen County.

“I love it,” Zeitz smiled. “You have to work with your mind and your hands. It’s just something I really enjoy doing.”

“He’s a treasure,” Taylor said of Zeitz. “He doesn’t have an answering machine or a credit card machine. He only wants to print and make these objects of art.” 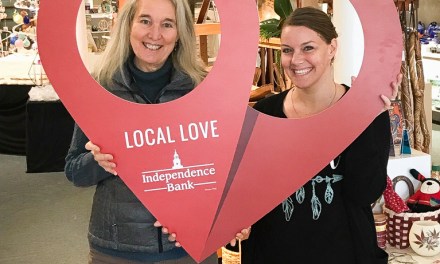 Sponsored: Spread some Local Love with Independence Bank and the Frankfort Area Chamber of Commerce 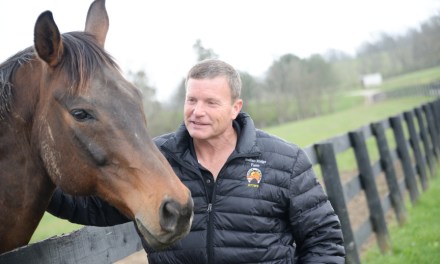 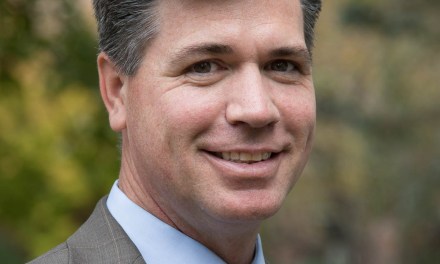 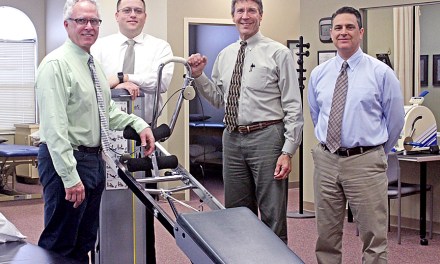