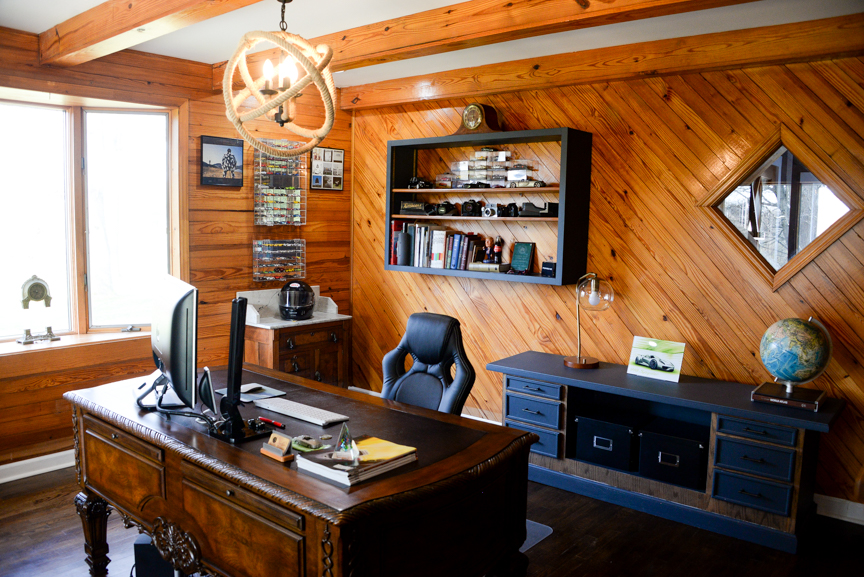 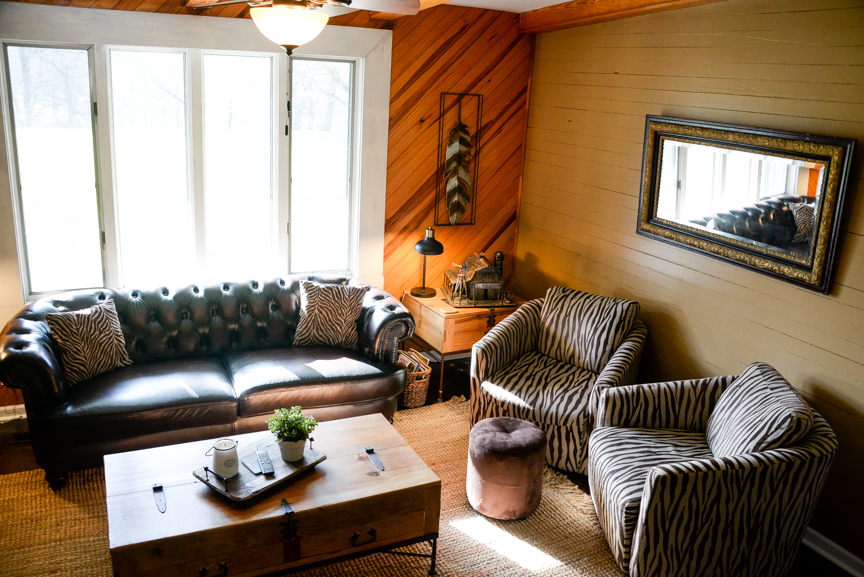 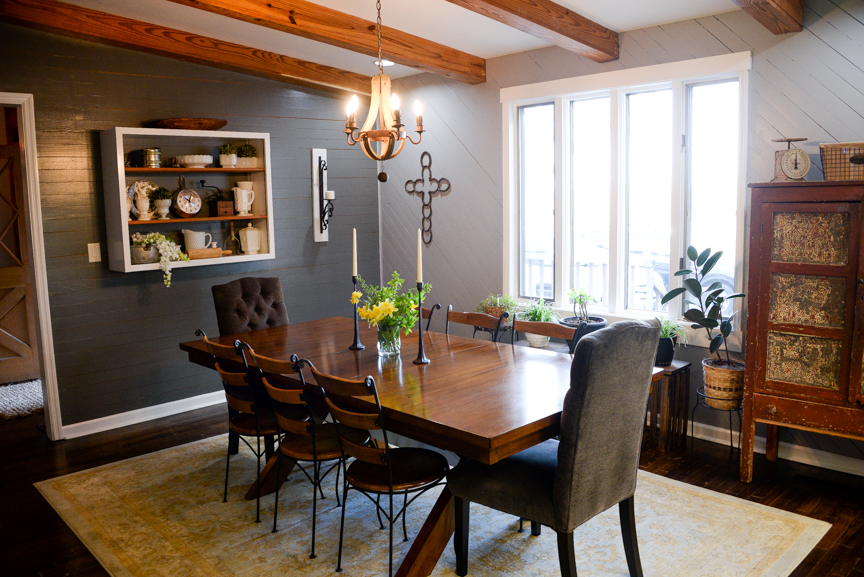 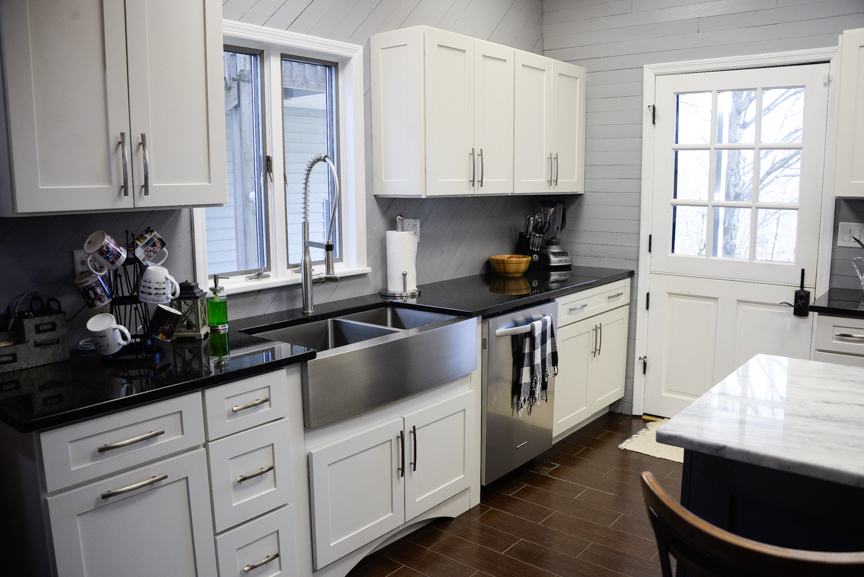 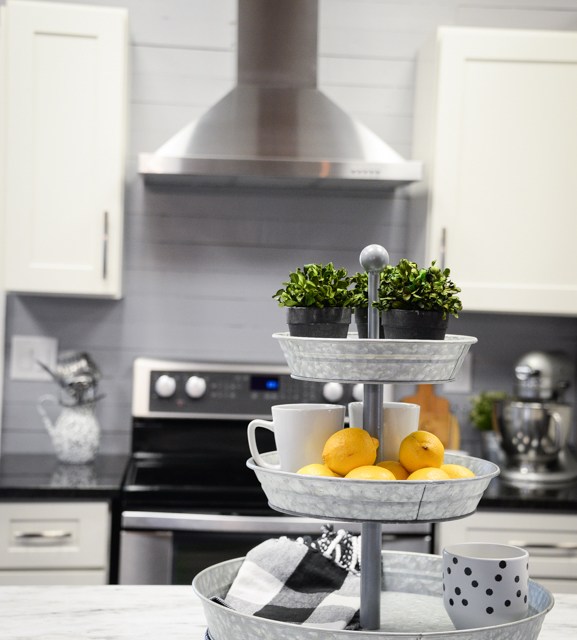 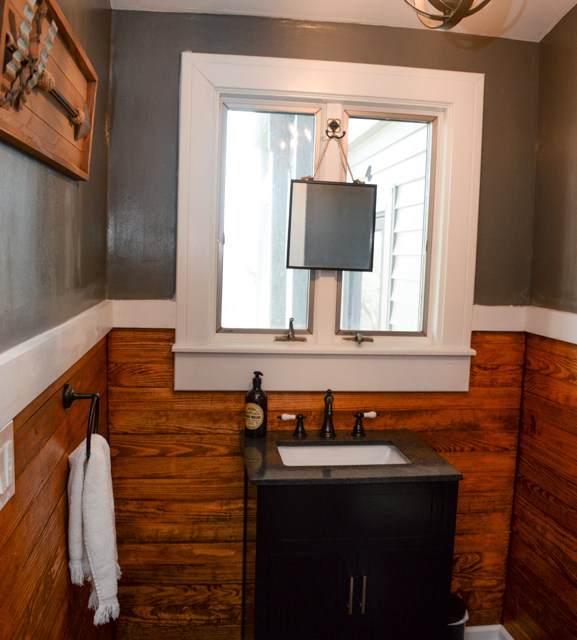 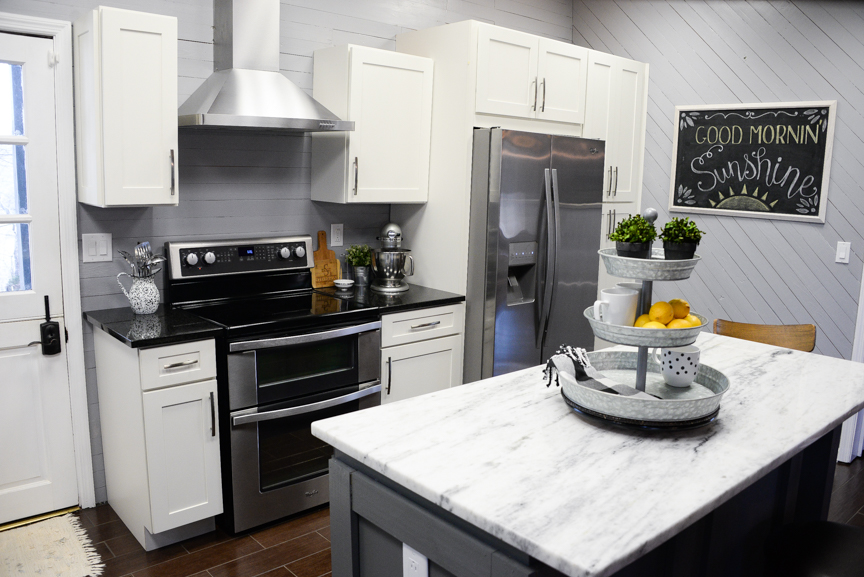 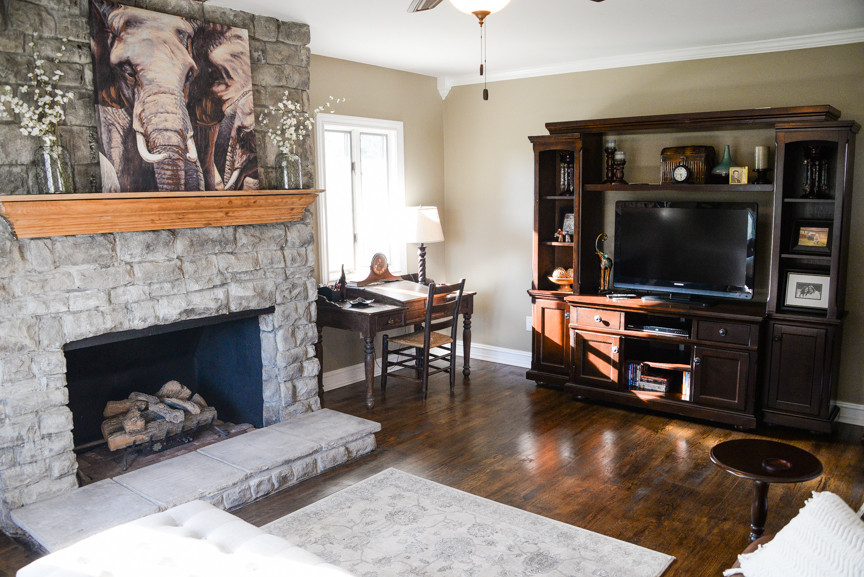 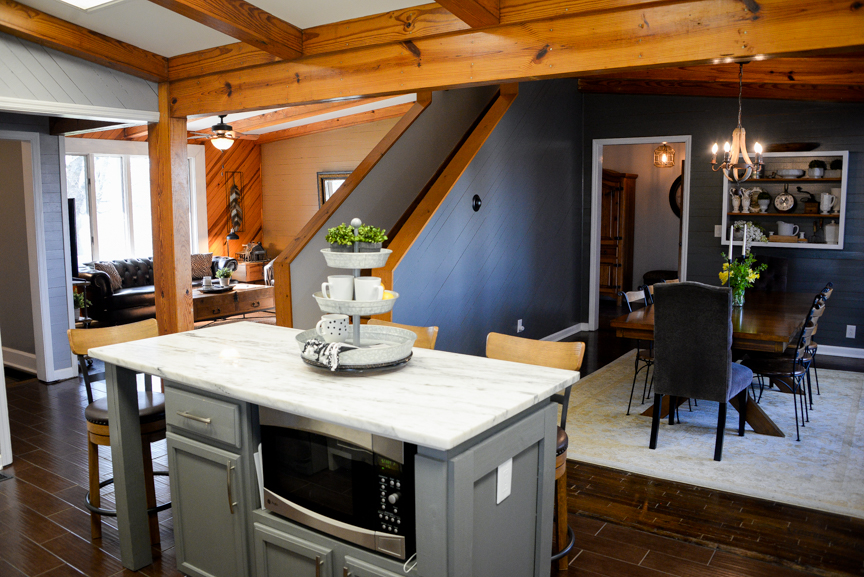 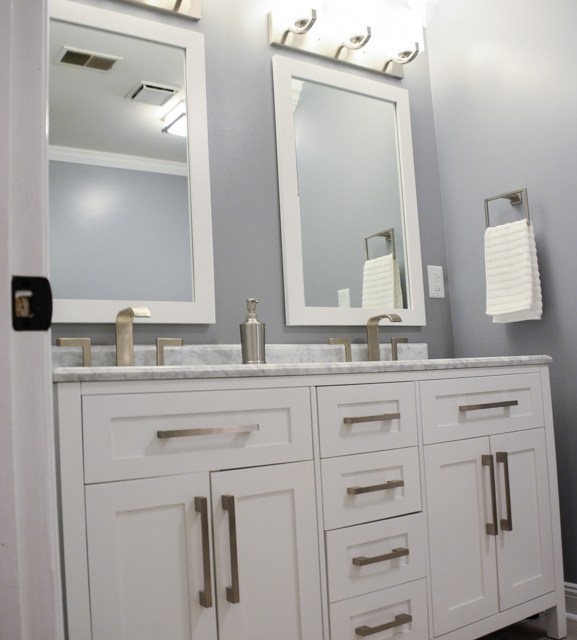 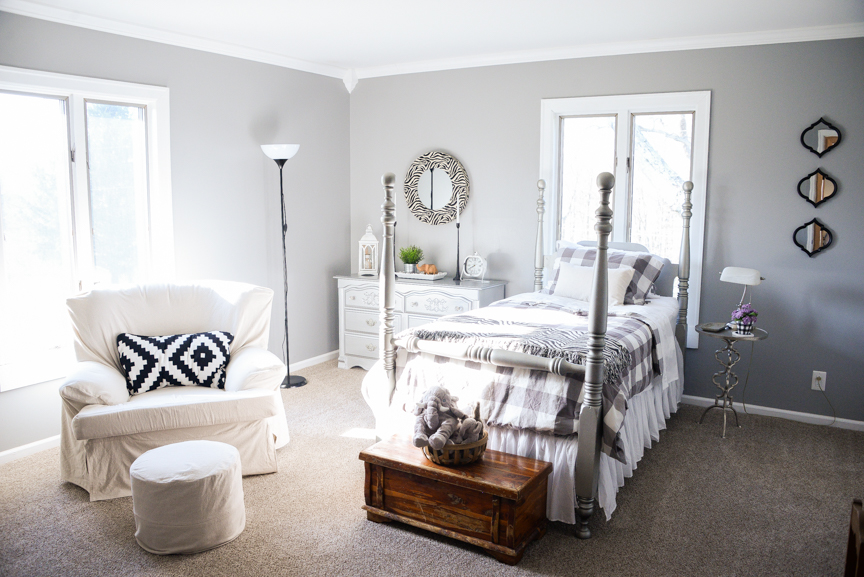 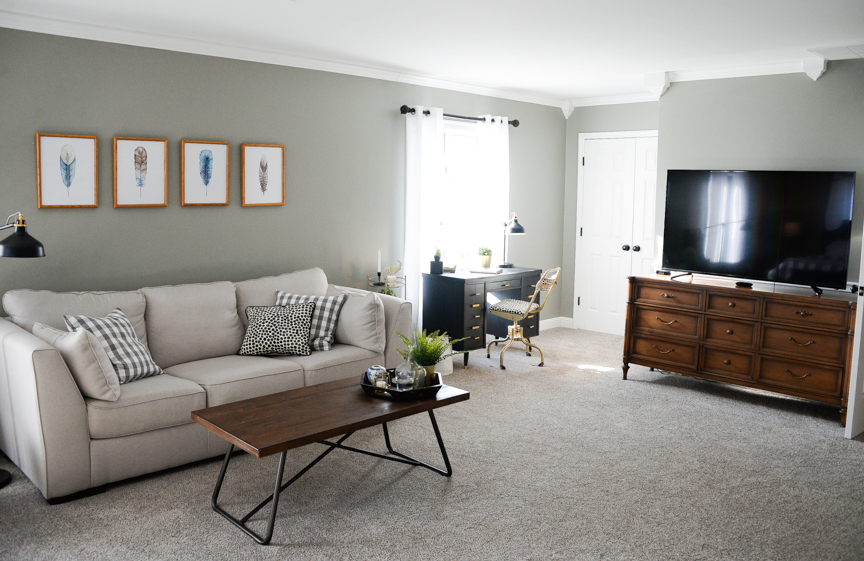 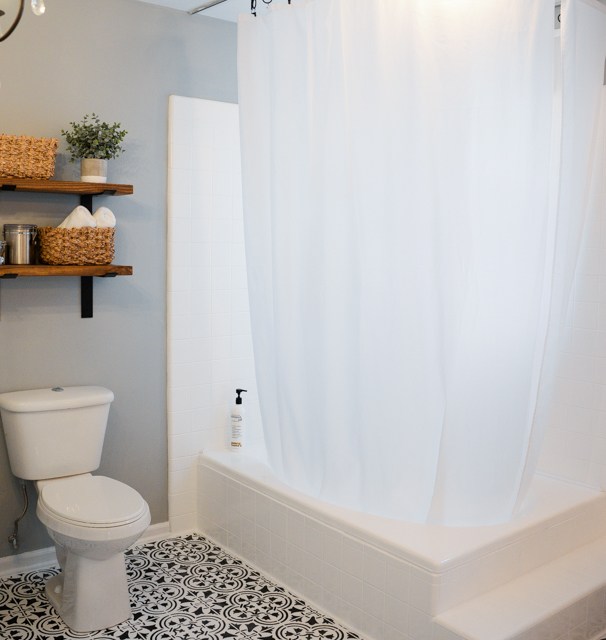 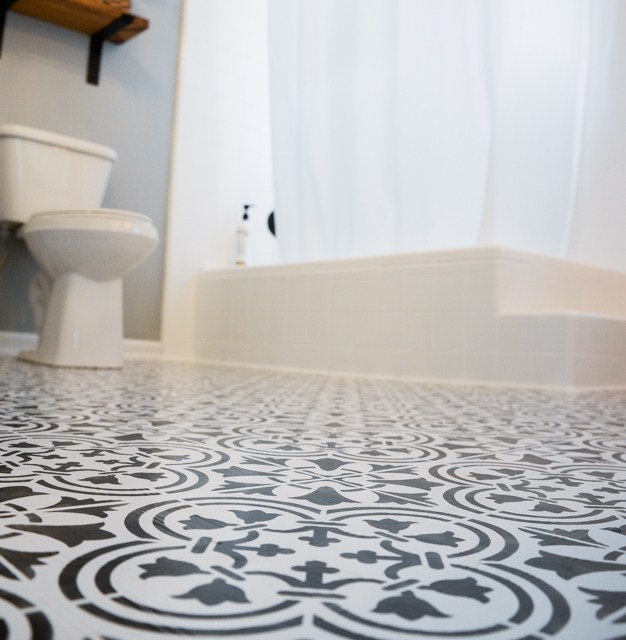 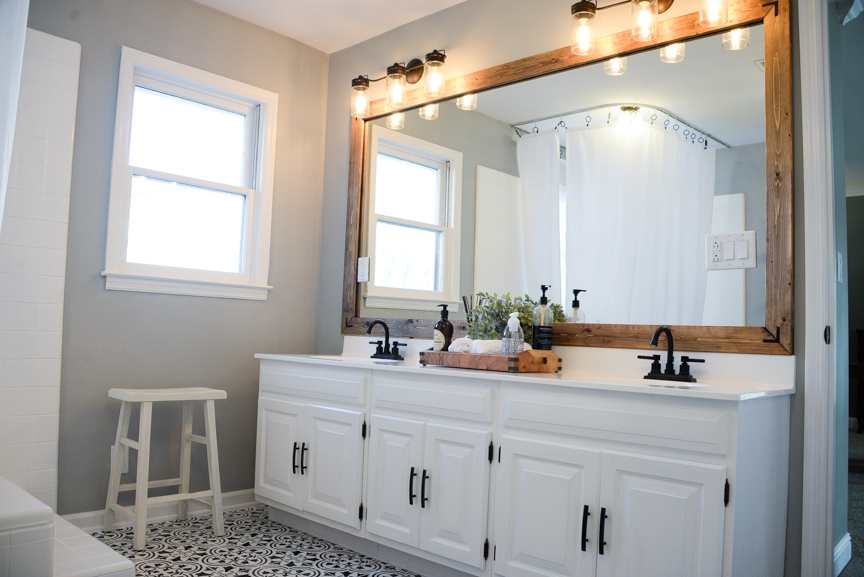 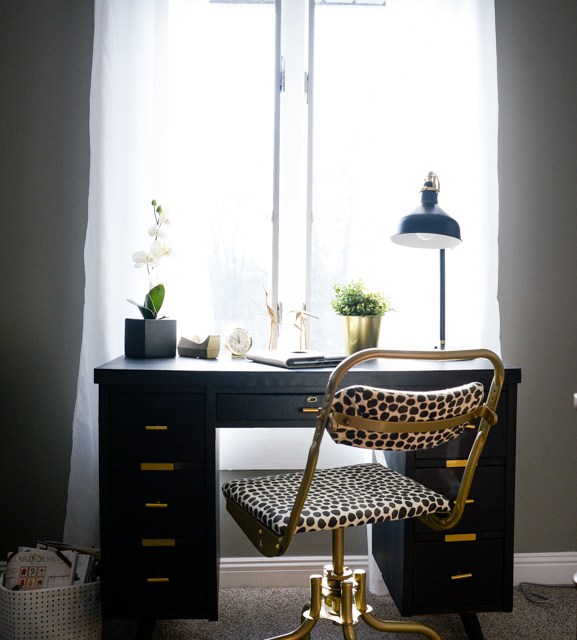 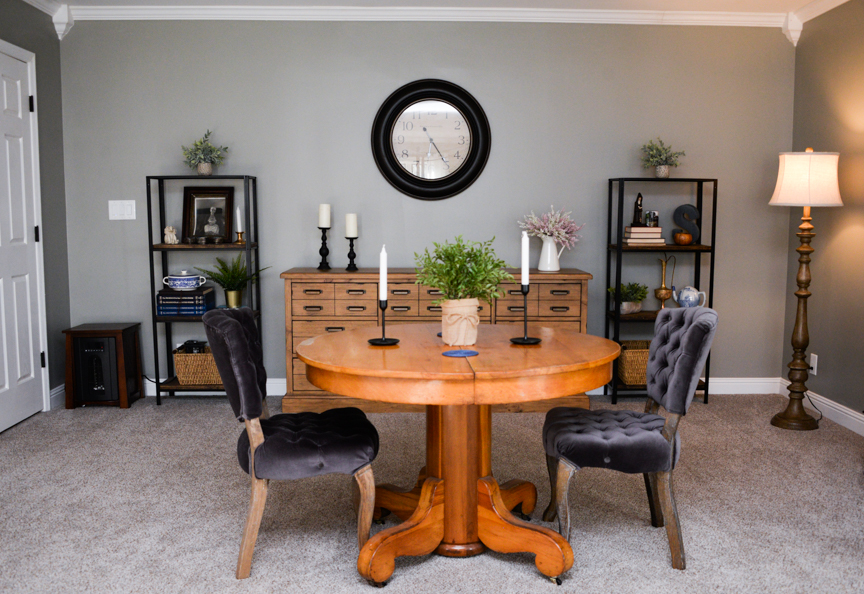 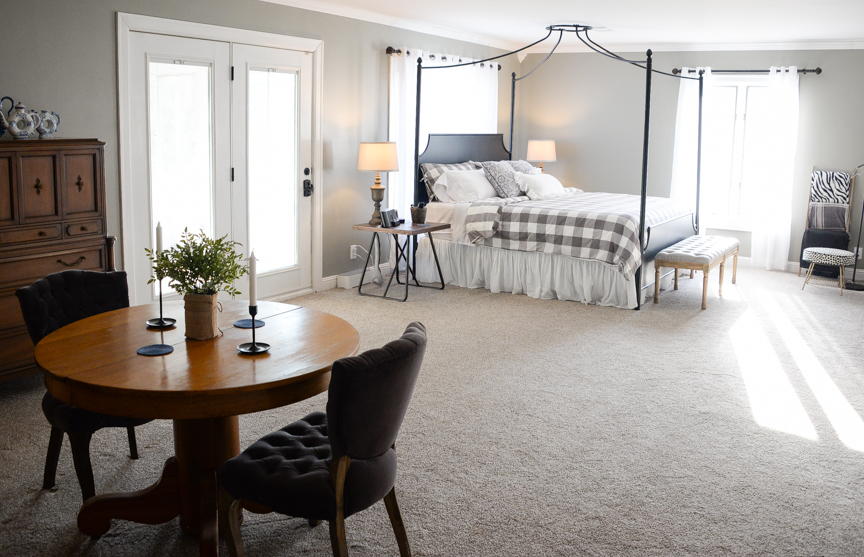 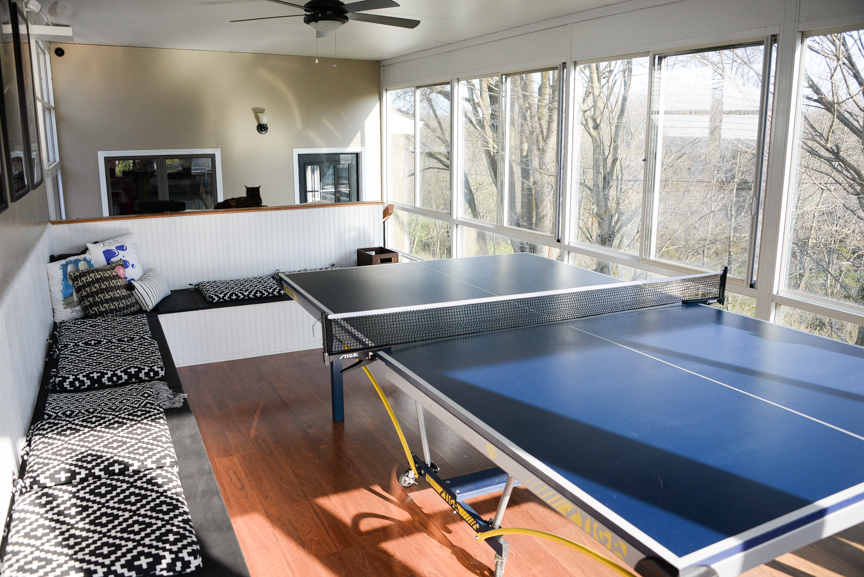 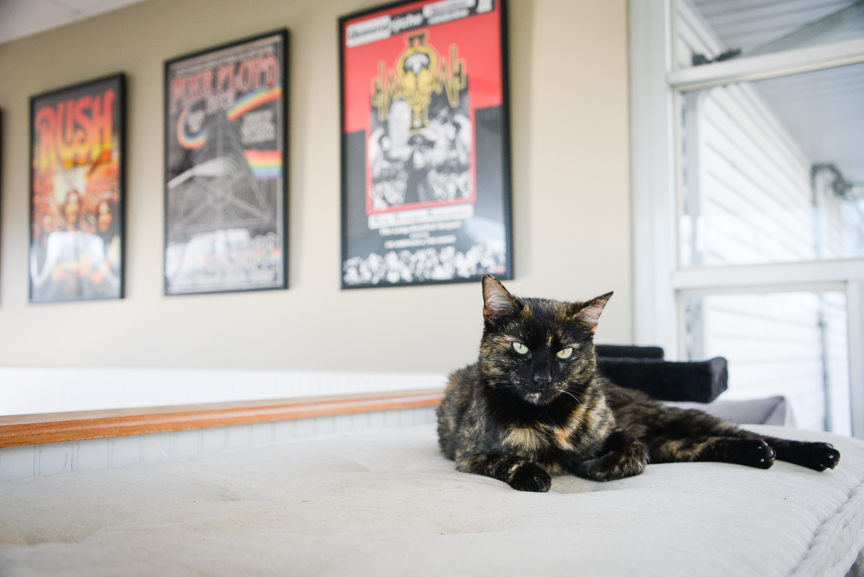 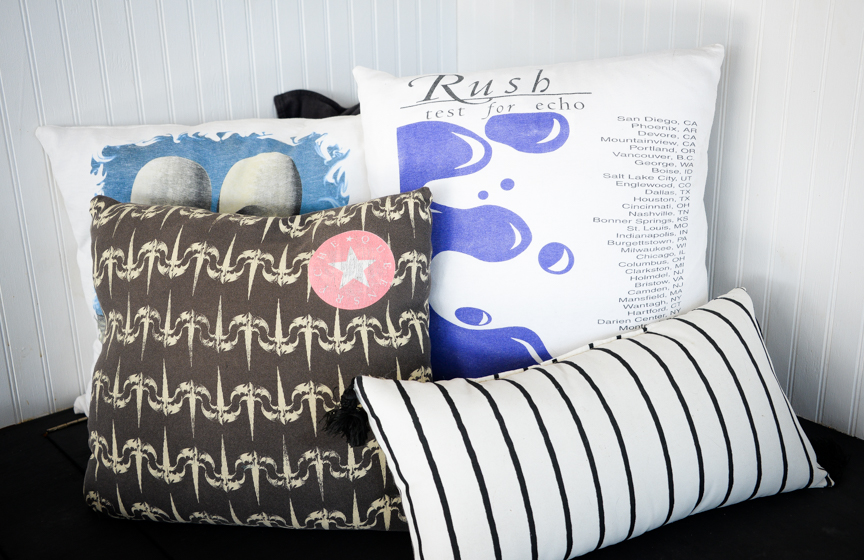 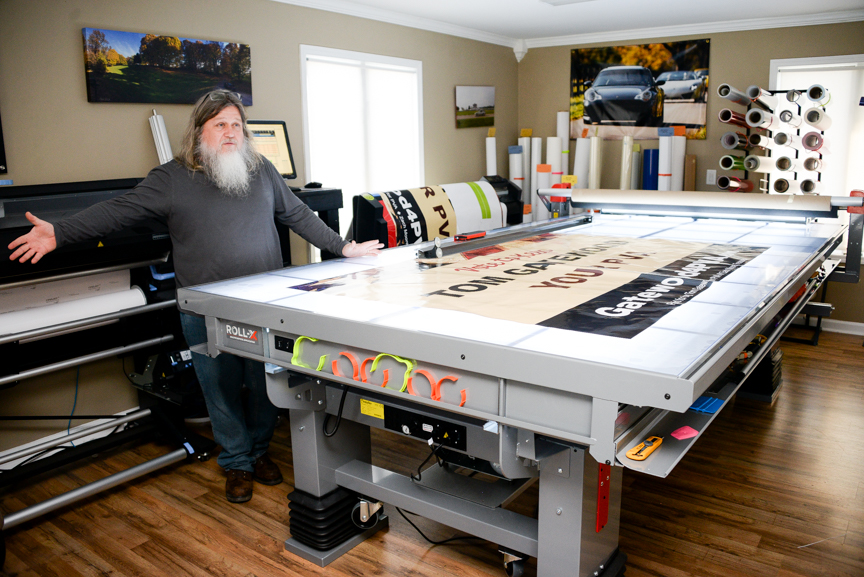 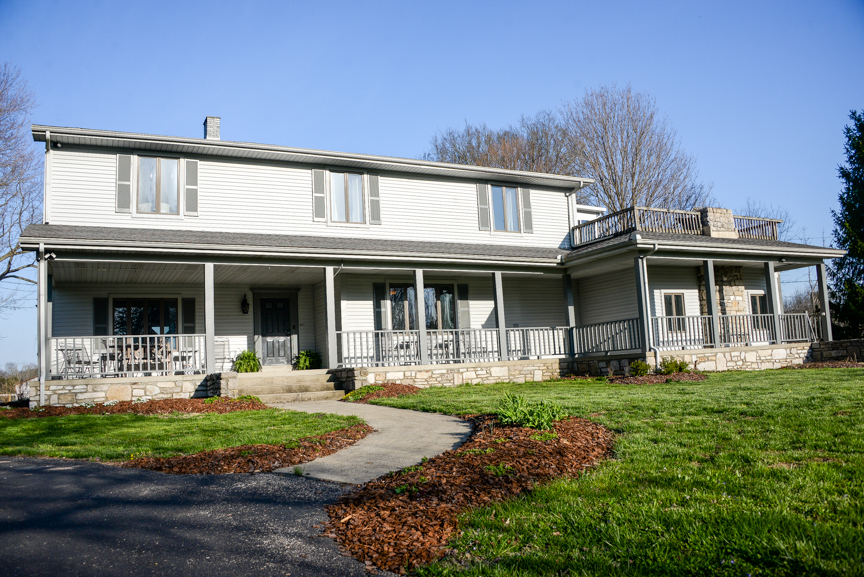 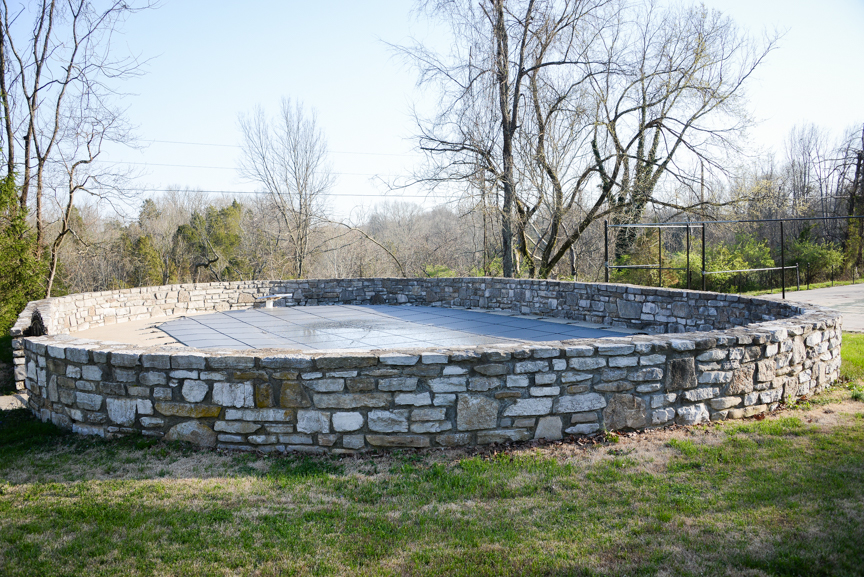 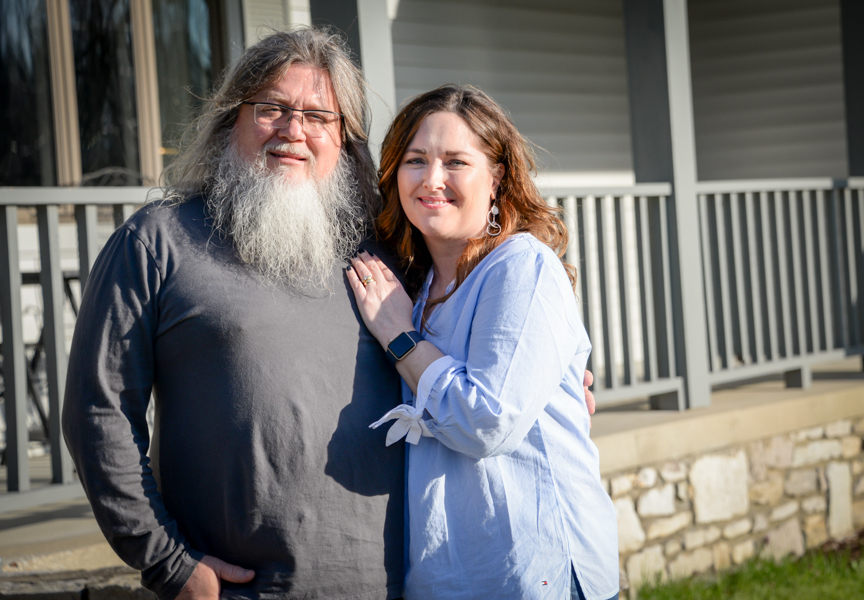 “Our growing business led us to our dream home,” owner of Abracadabra Graphics, Ed Steverson, explains. When Ed and his wife Tracy first saw the house on Old Lawrenceburg Road, they say they realized the potential in the foreclosure property, knowing it would give them the space they needed for their graphic design company plus a spacious home and grounds.

The couple had to see past a home that was in need of major updates and the overgrown property. After more than a year and a half, they feel like the inside is, for the most part, finished, making the house into the home they envisioned.

The next project on the list is to restore the existing tennis court.

“We don’t know how to play tennis,” Ed says, laughing. “But, my belief is that if a property has a tennis court, then you ought to fix and use it.”

They have already renovated the pool area and done quite a bit of landscaping around the house.

New life for an old house

The Steversons bought the three-bedroom, four-bath house in May 2015. After completing renovations of the office and a bedroom, they made the move from Rancho Court off of Rolling Acres Drive.

“We finished the office so we could work, and the bedroom because we had to sleep!” Ed said. “Then we just continued to work — finishing one room after another.”

Tracy recalls that it was a bit like camping at first.

“We did have a refrigerator and a microwave so we could fix a frozen meal, so that was good,” Tracy says. “We were just happy to be here,” she added.

“Every surface of this house has been redone — floors, walls, ceilings,” Ed says. “We’ve replaced every single receptacle and wall switch. That’s 237 receptacles!”

Ed and Tracy have done most of the work on the home themselves.

“Tracy’s always got a good eye to put things together, so I’d say she took the lead and I was the laborer,” Ed comments. “And, thankfully, we’ve had a really smart, young guy who I hired to help us get to this point.”

Tracy’s most recent project was to renovate the master bathroom, including stenciling the floor, applying coats of polyurethane and painting the bathtub.

“We’ve pretty much done everything ourselves except the driveway repair, the carpet, the pool liner and the granite countertops,” Ed explains.

The original one-room house, according to Ed, is more than 100 years old. Newer additions to make it a two-story home were added later. His research says the house was even owned at one time by a CIA agent named Plue.

“We found these old crates in the garage with his name on them,” Ed says. “We decided we had to do something with them so we cleaned them up and turned them into nightstands for one of the bedrooms.”

The 10-acre property has more than 6,000 square feet under roof including a state-of-the-art garage that houses Ed’s car collection. The couple’s graphics design office is located above the garage.

“This is a large home for just the two of us,” Ed says.

So, to make their lives easier, Ed has installed an automated smart home system with all the bells and whistles.

“I decided to add a comprehensive smart security system,” he says. “We have 21 cameras and three Nest programmable thermostats. We can turn the lights off or on from anywhere, control the garage doors and monitor our property,” he explains.

In designing the home, Ed and Tracy didn’t change much of the home’s current footprint.

“We removed a wall of cabinets between the kitchen and dining area, which opened things up quite a bit but that’s about it,” Tracy says.

Wooden beams and an abundance of shiplap give a rustic, yet updated vibe to the main living and dining areas. Ed’s office is a reflection of his interests including a Hot Wheels Porsche collection.

“I’m a past president of the local Porsche Club and am very active with them,” Ed explains. A poster-sized photograph of Ed driving one of his black Porsches during a covered bridge ride hangs over the fireplace in his office.

Several heirloom pieces have a place of honor in their home, each with it’s own story. Ed and Tracy respect the antiques and memory of the family member who gave it to them. One such treasure is Ed’s grandfather’s Kentucky long rifle, which is mounted above a door in the entry hall.

“My other grandfather’s hobby was tinkering with clocks,” Ed remarks. “That’s why you’ll see the clocks hanging in some of the rooms.”

They have even restored an old desk that his grandfather sat at to work on the clocks. It now has a place in their master bedroom.

“We like to take old things and spruce them up,” Tracy says. Ed adds, “They have meaning and you can’t buy the stories!”

Not as old as the long rifle or the clocks, but possibly just as meaningful, is Ed’s collection of rock band posters. Pink Floyd and Rush posters among classics line the wall above seating in what they call the Ping Pong room. In this second floor room that stretches along the back of the house, table tennis enthusiasts can ping and pong in a room with a view of Cedar Run Creek.

Pillows perched on the couches made from Ed’s collection of concert T-shirts and a collage of concert tickets add to the themed decor.

“Ed got me a sewing machine a couple of years ago. I’m still learning, but it’s fun,” Tracy says. “And I got some cool pillows!” Ed chimed in.

Between the ping pong room and the office, a set of outdoor steps leads down to the back of the house and one of Ed’s favorite spaces. An immaculately clean, beautifully-appointed garage houses his car collection.

“I have a 55-inch Apple TV with the Wii and surround sound, a raised-slot car track and my cars,” he says. “I can crank the sound up and hang here for some fun.”

Ed and Tracy have applied their design expertise to their home, creating a comfortable compound to entertain friends and to enjoy their family. Both grew up in Frankfort and agree that they are happy living and working here.

“Frankfort has been a nice, calm place to bring up a family,” Tracy comments.

The couple have three adult children, Jenna, Kaitlyn and Corbin.

“We like to think we’re the best thing to happen to this house in awhile,” Ed says.

The Steverson home will be one of the featured homes on Home and Garden Tour set for 10 a.m.-5 p.m. June 9 sponsored by The Garden Club of Frankfort and the Frankfort/Franklin County Tourist and Convention Commission. For advance tickets contact the Tourist Commission at 502-875-8687. Tickets on the day of the tour will be available at the Tourist Commission, 100 Capital Ave., the Frankfort Country Club, 101 Duntreath St., and at each home or garden on the tour.

More to see on the Home and Garden Tour

Marcia and John Walker have lived in their 1968 tri-level house since 1995 in the Thistleton neighborhood. The brick used in its construction is said to have come from the E.H. Taylor Distillery. The Thistleton neighborhood was the site of Mr. Taylor’s estate. The Walkers have created a comfortable haven with many family heirlooms and personal artistic touches. A handsome hand-hooked rug greets visitors in the front entry. The hooked rug framed above the couch in the living room depicts the Walker family home in Columbia, KY. Every room in this house tells a story of family history and current creativity. Outside, the Walkers have created gardens featuring an array of flowers, trees and shrubs.

Glenna and Dan Glass built their white, Southern Traditional house in 2000 and created an elegant home with family heirlooms, purchased antiques and overstuffed furniture. Vibrant colors create warmth, and the windows facing the 14th hole of the Frankfort Country Club golf course bring in lots of light, especially to the former screened in porch, now a pleasant sitting room off the kitchen. Dan’s family operated the former Glass Mill in Jessamine County, and they have retrieved and refinished some of the wood furniture from the mill, such as an antique cabinet and side table in the kitchen, and a carved filing cabinet in the office. A large man cave on the second floor is a complete retreat furnished for every need. The rest of the second floor contains guest bedrooms with antiques and a playroom.

This historic home with its handsome limestone and wood shingle exterior sits on nearly five acres adjoining the Cove Spring Nature Preserve & Park. It was built in 1924 as a residence for the Fincel family and operated as a Montessori School from 1983-2002. David Fields and Nikolai Pennington have done extensive renovations converting the building back into a single-family residence. The house has approximately 5,000 square feet of living space. It now contains three bedrooms and two and a half baths. Many original features including the hardwood floors, windows and unique woodwork have been preserved. The recent renovation included installation of a spacious gourmet kitchen as well as a deluxe master bath upstairs. David and Nikolai’s home, named Riparia, earned distinction when they were awarded a Historic Landmark designation in 2017 from the Franklin County Trust for Historic Preservation. They have added gardens, a stone patio, and waterfall to enhance the rear yard. Part of the grounds is used as a retirement sanctuary for animals they’ve rescued from abuse and neglect, including chickens, turkeys and rabbits, several rescued dogs, a bird and a miniature pig.

In order to better enjoy their large back yard the Sutherlands built an open-sided structure in 2014. Designed by Richard, it includes a comfortable seating area centered around a large stone fireplace, as well as an outdoor kitchen equipped with a gas range and grill, sink, refrigerator and bar seating. Additional dining space is available at several tables on the surrounding hardscaped patio. Ceiling fans and the gas fireplace allow the space to be comfortable for much of the year. While highly functional, the design doesn’t sacrifice aesthetics. The use of stone and natural wood finishes and the green metal roof complement the setting, which includes a view of the large lawn, many trees and a historic rock wall at the back edge of the property.

Homebuilder Wayne Henning has used his skills to create a “dream home.” He and his wife Jean moved in last summer. The 7,500 square-foot brick and stone house sits on a hill, up a winding gravel drive just past Peach Lumber. The openness of the floor plan and the wall of windows across the back of the house allows an exceptional view of the rolling pastures of the farm beyond. The layout of the main living space is designed for maximum convenience with living, kitchen and dining rooms incorporated into one large open space. There’s also a screened porch with heated floors off of the dining area. The master bedroom suite and a large laundry room/mudroom and office areas are also on the main floor. The lower level features a spacious entertainment room and guest bedrooms and bath. The rooms on both levels have 10 foot or higher ceilings to enhance the feel of openness. Notable amenities that were built into the house include three fireplaces, custom-built cabinetry throughout, a super-efficient geothermal HVAC system, and integrated audio, video, lighting and alarm systems. 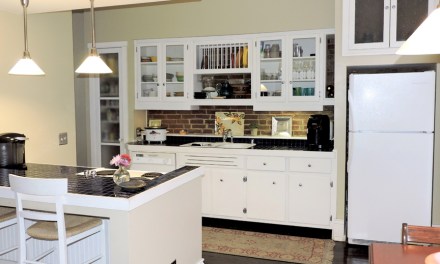 Downtown Charm — A barristers home with built in history 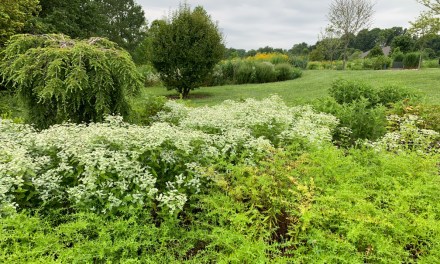 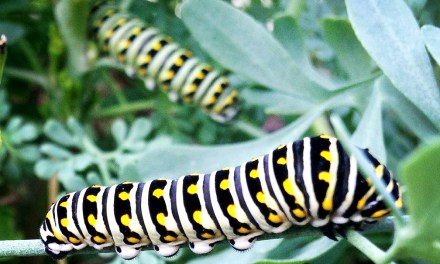 Pollinators are aflutter over annuals, are you? 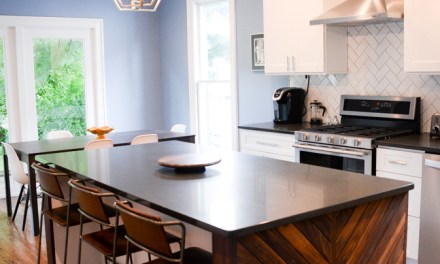