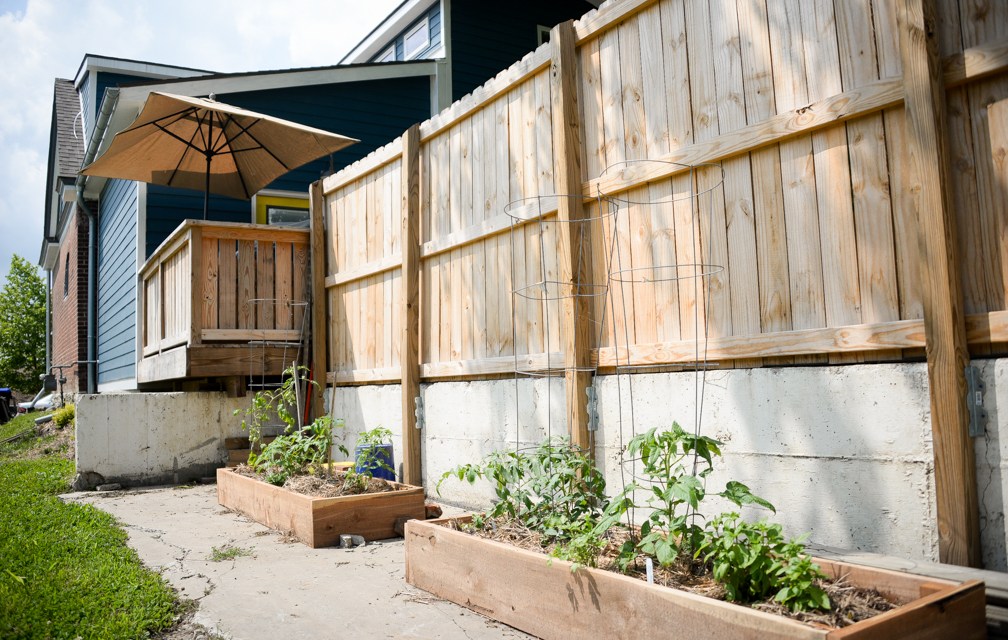 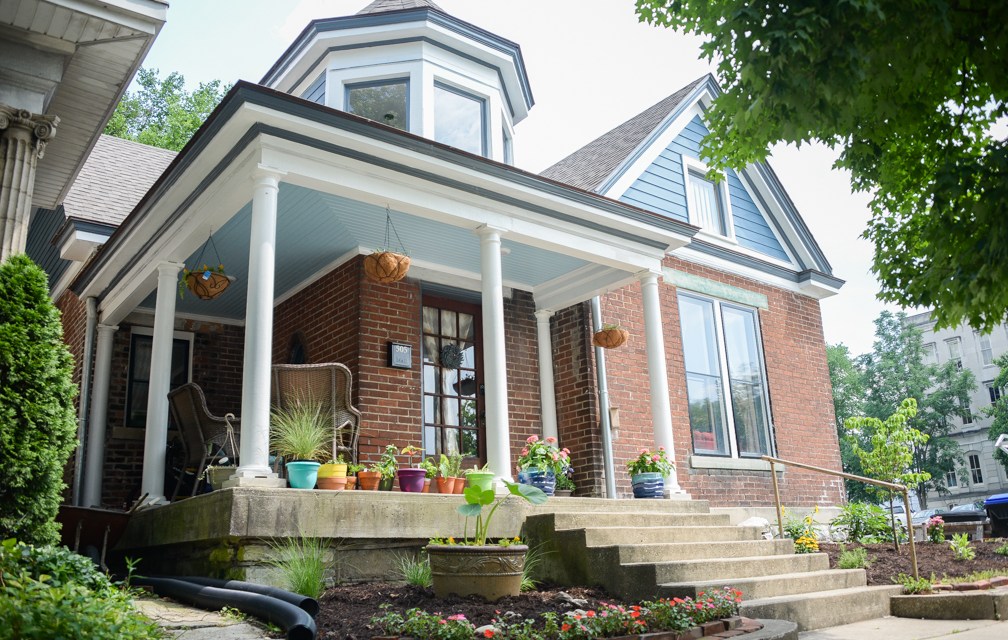 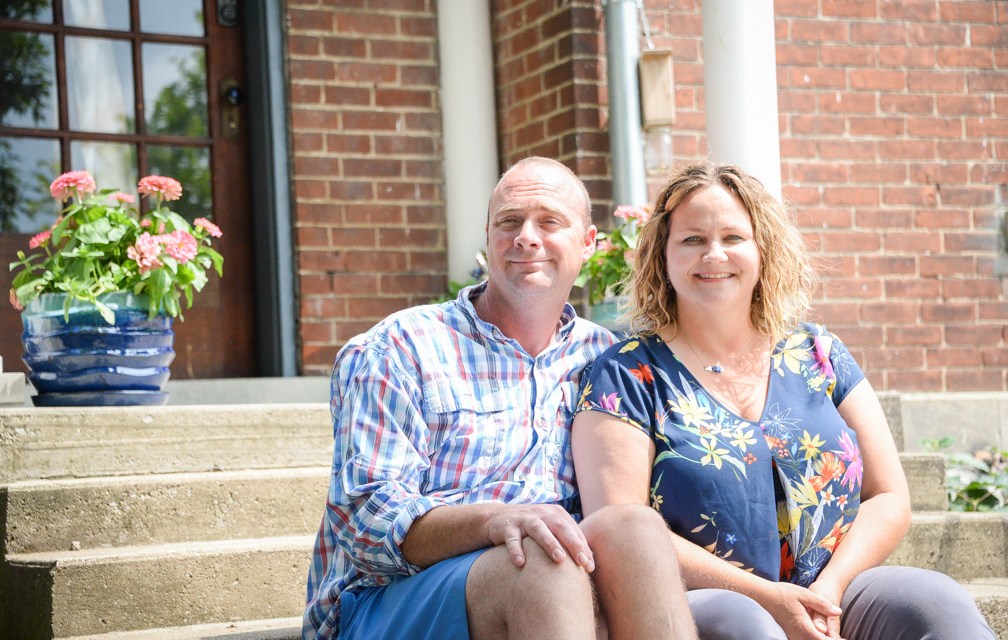 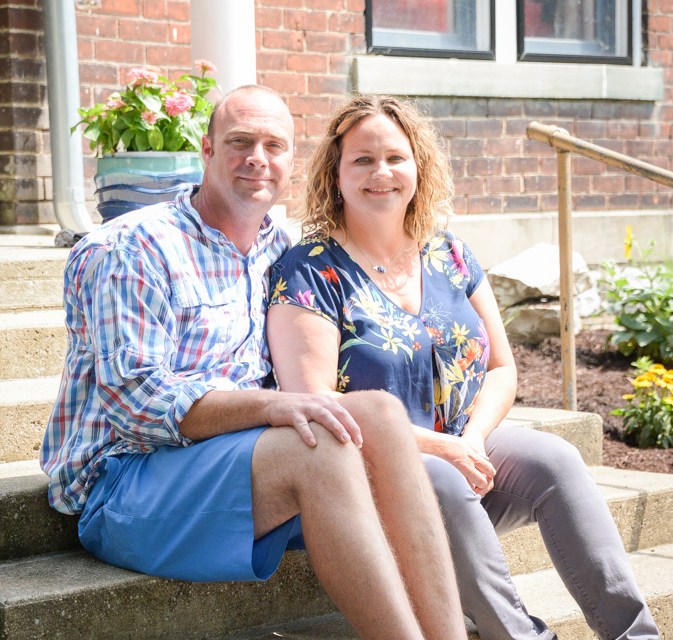 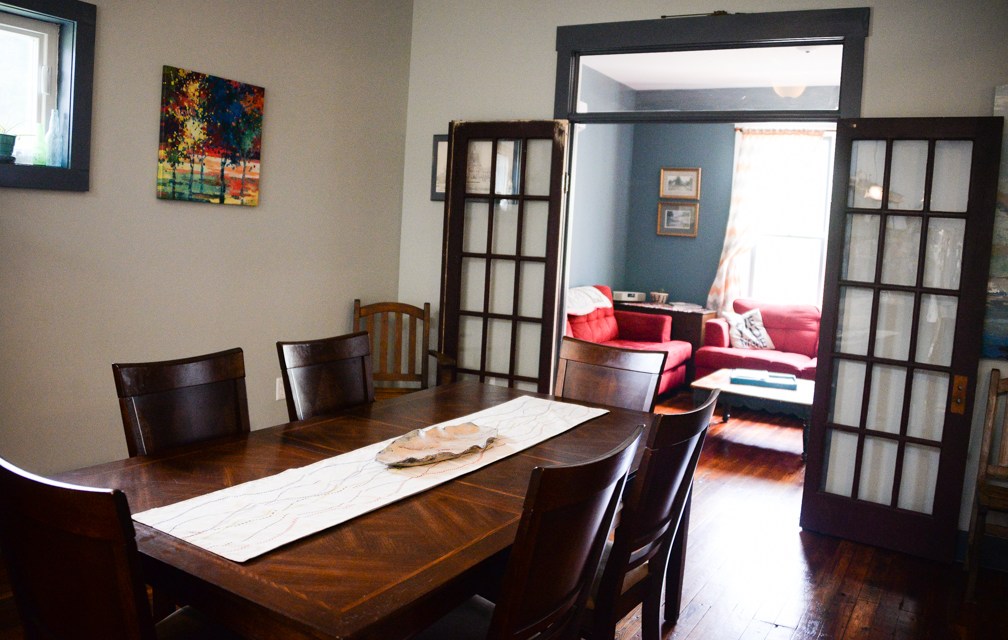 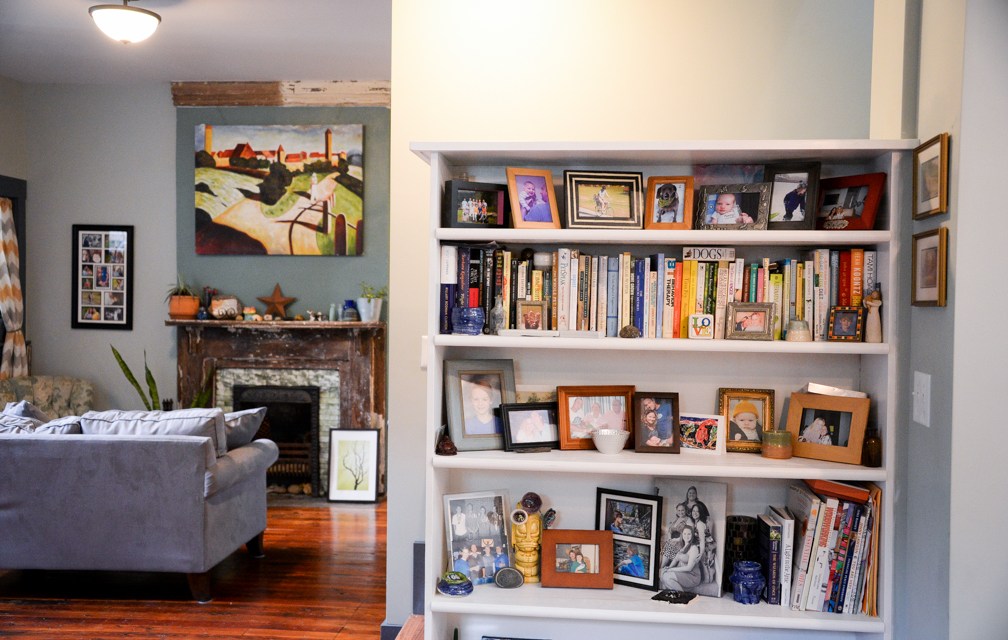 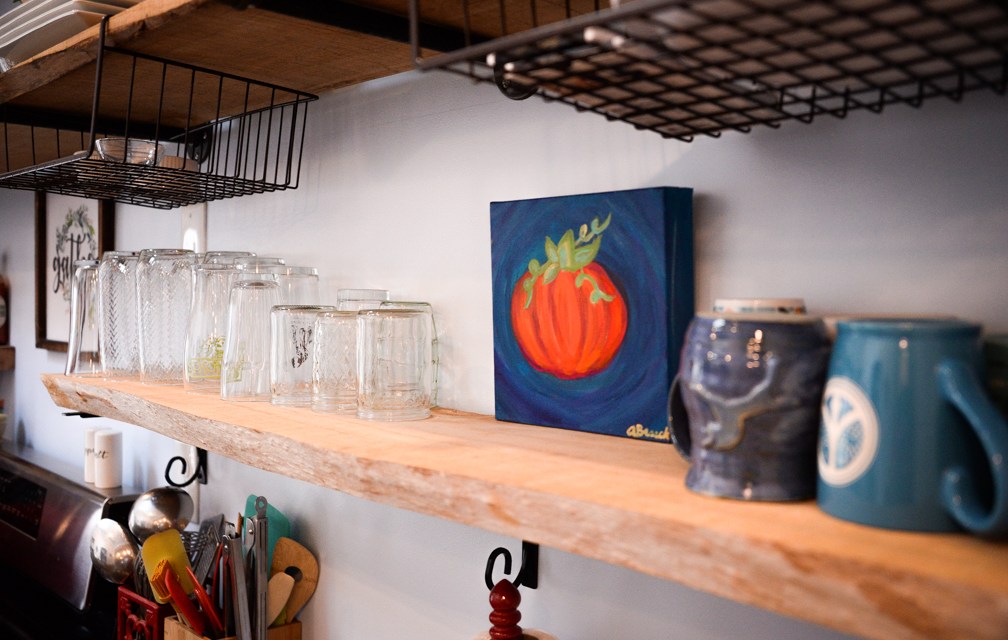 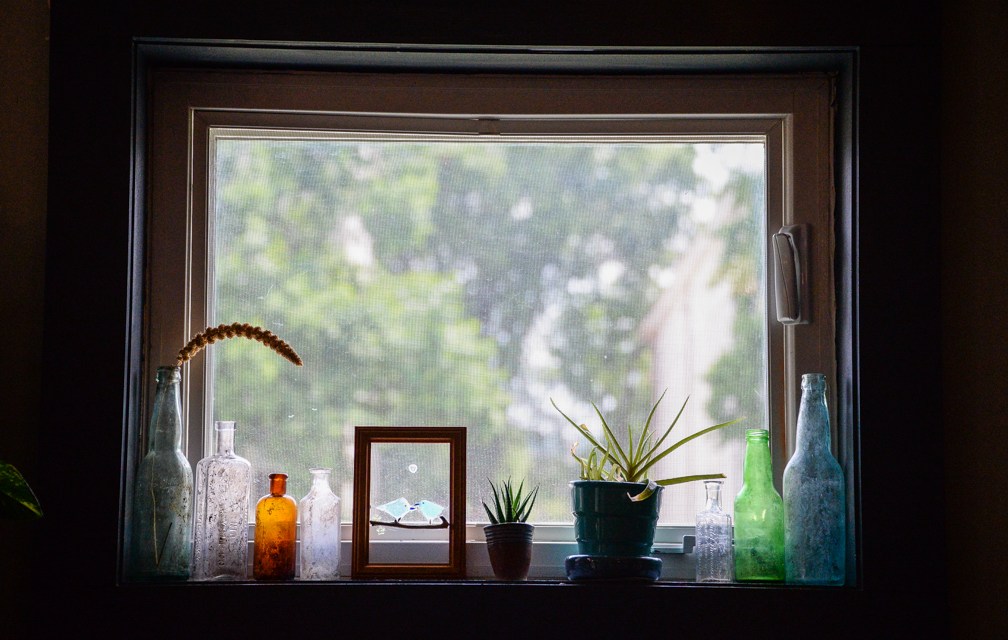 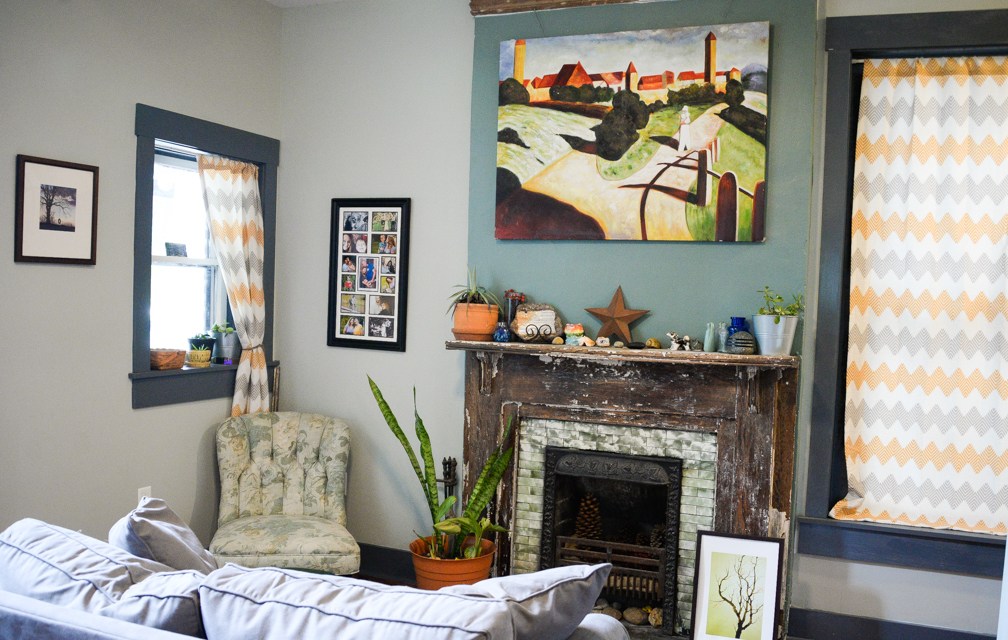 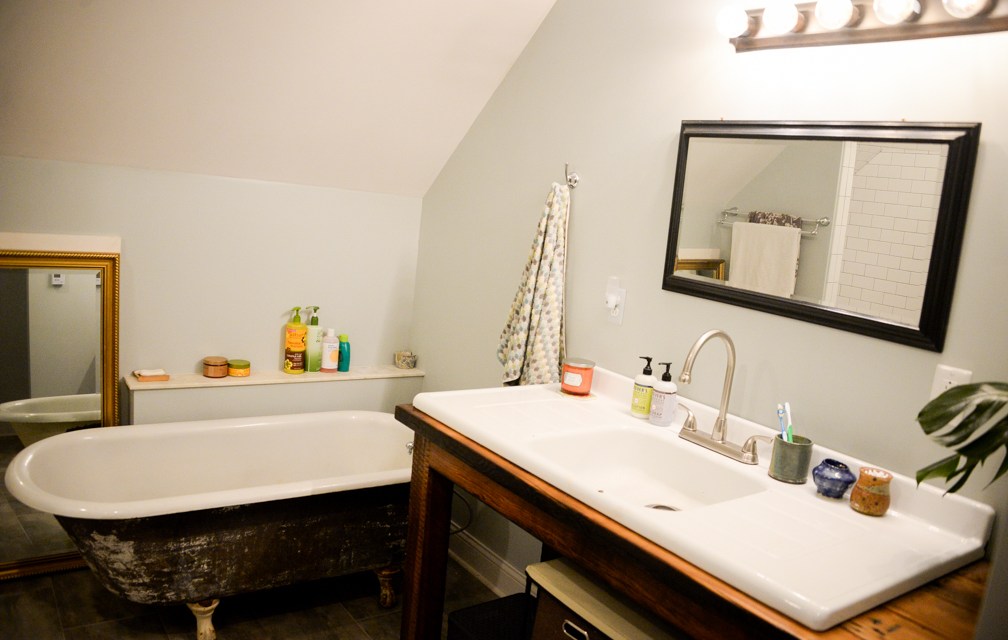 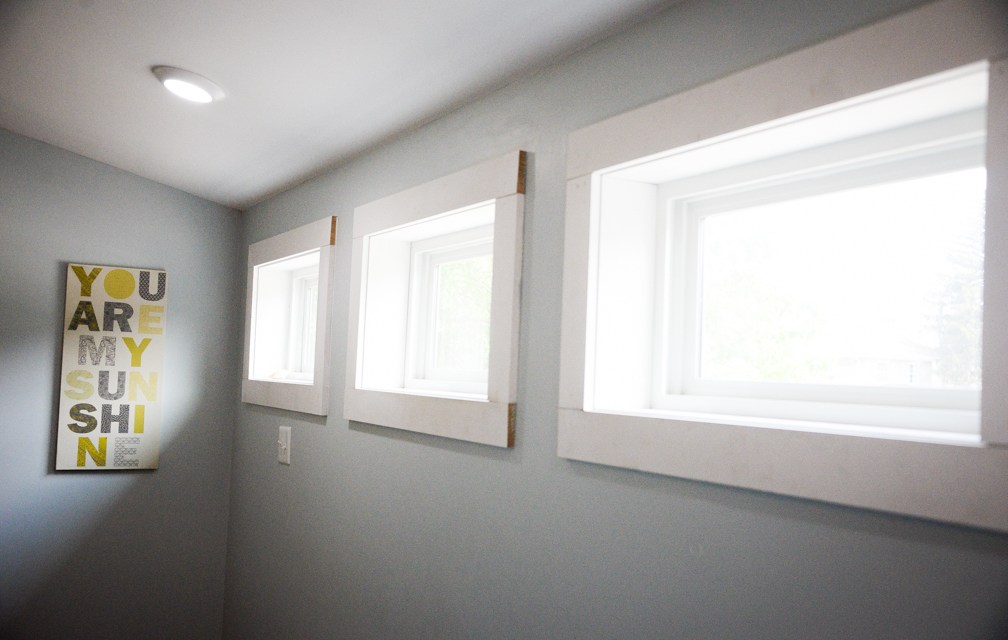 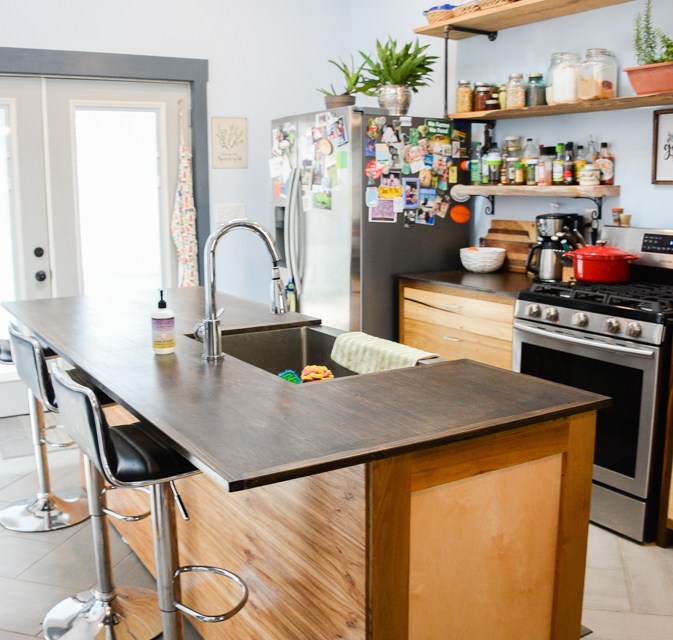 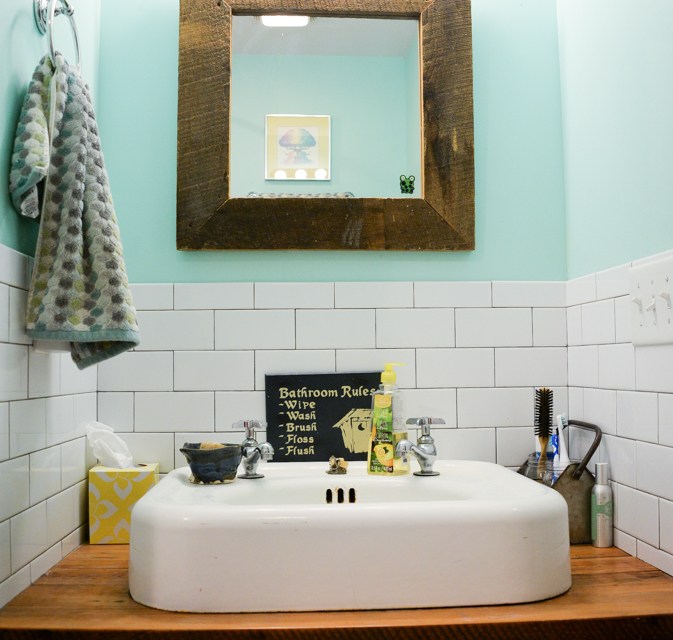 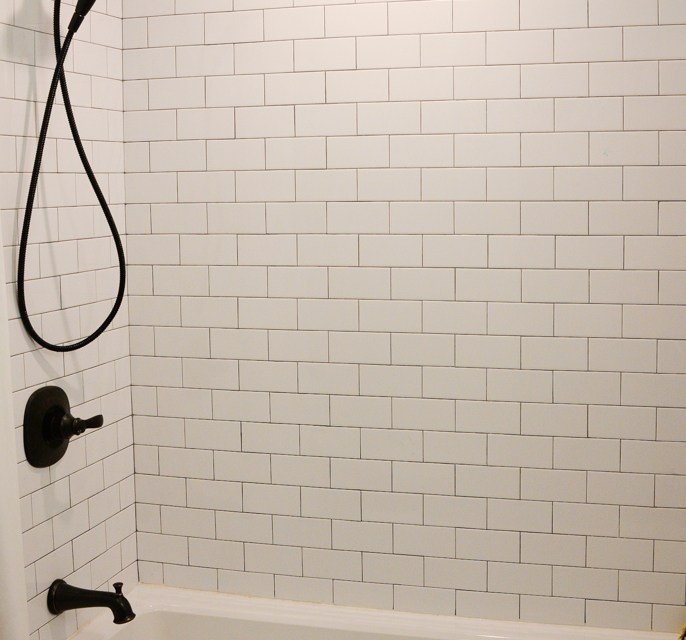 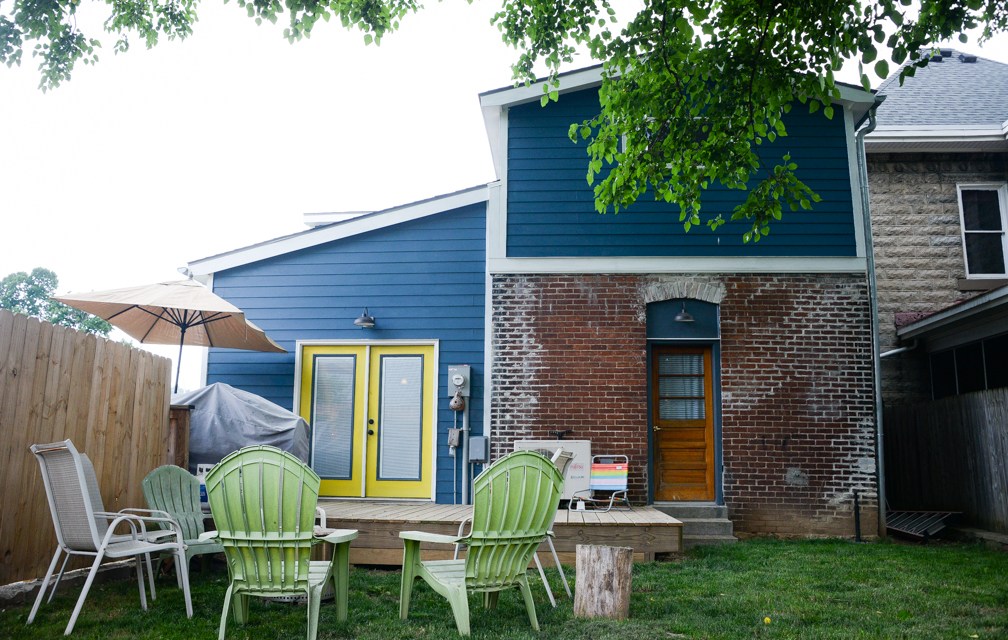 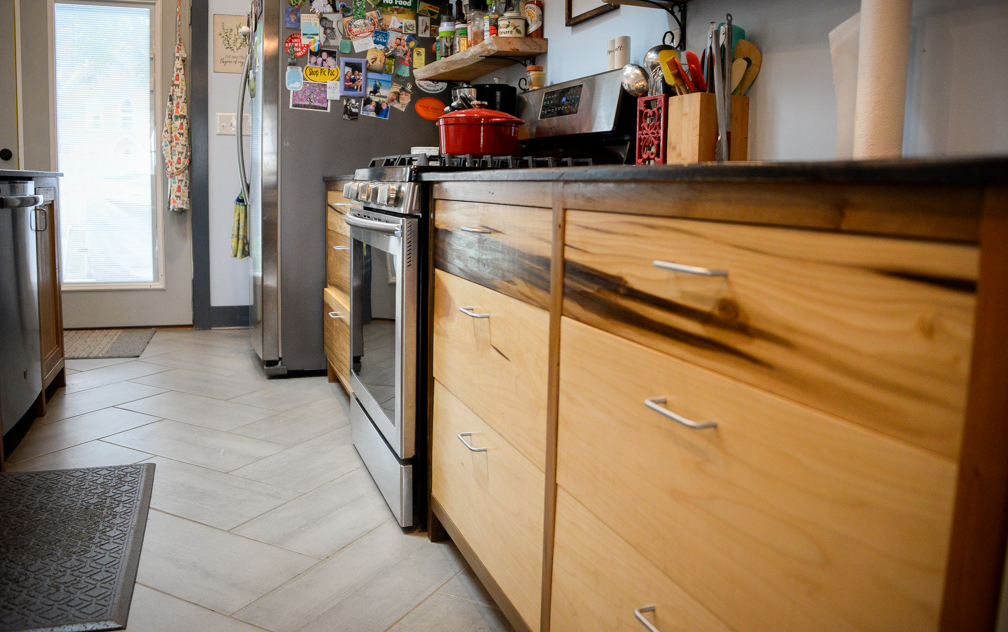 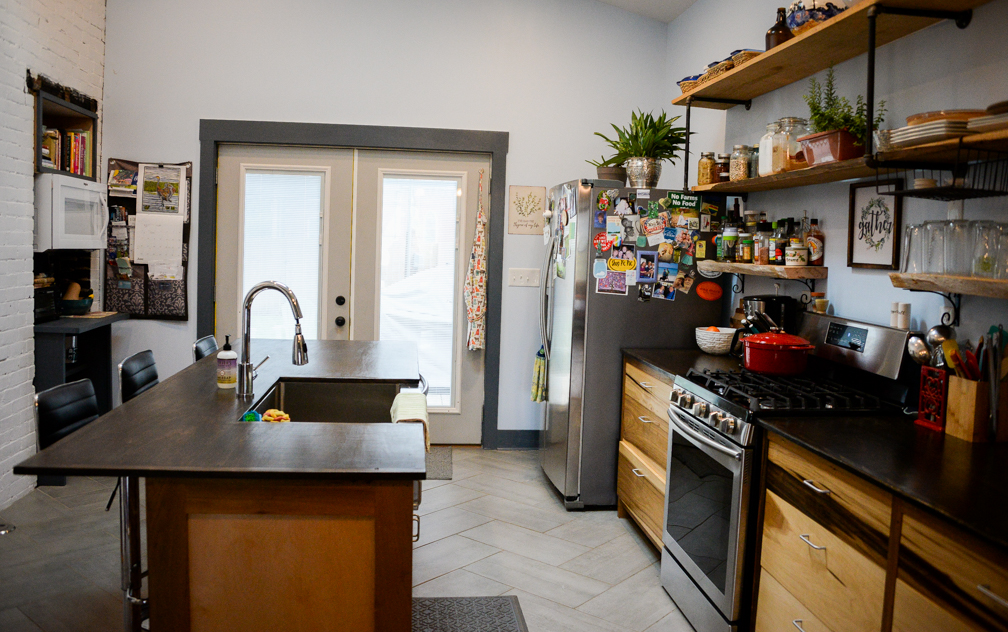 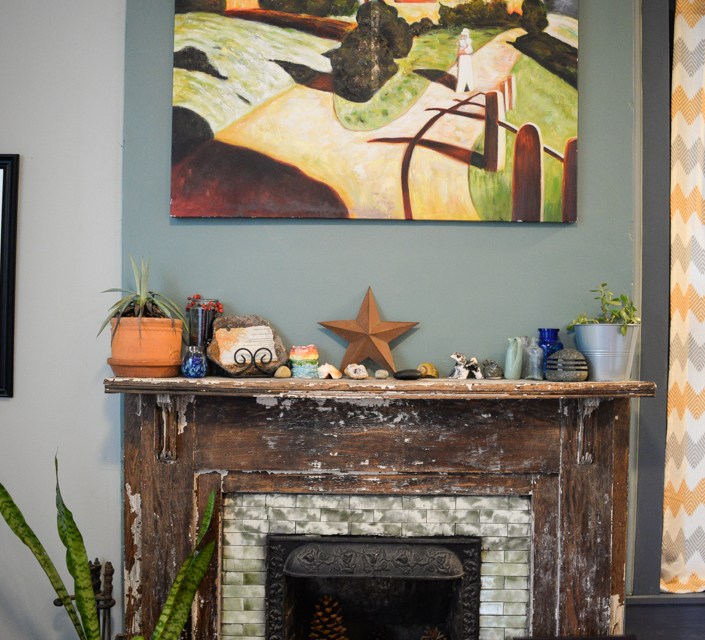 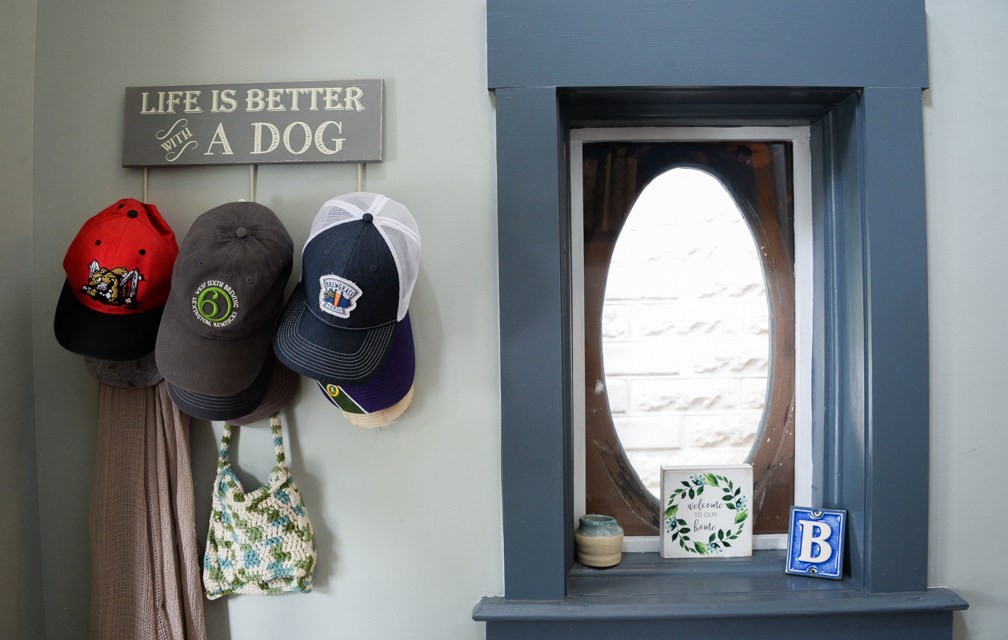 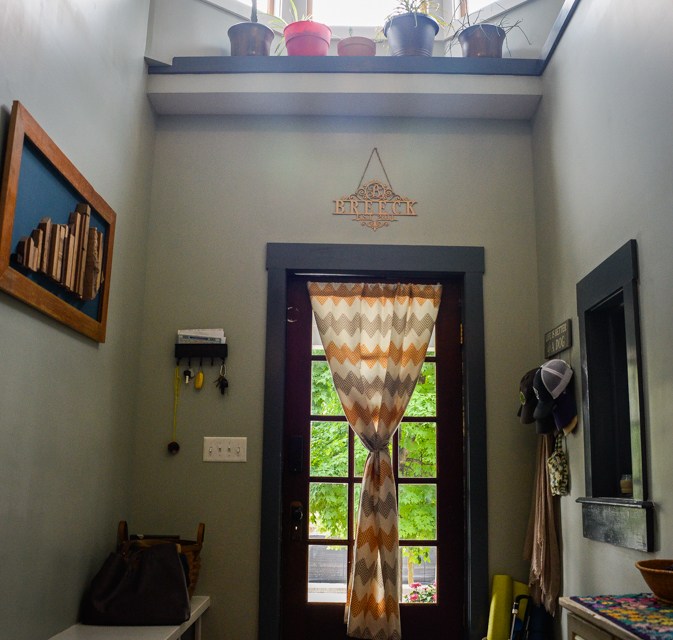 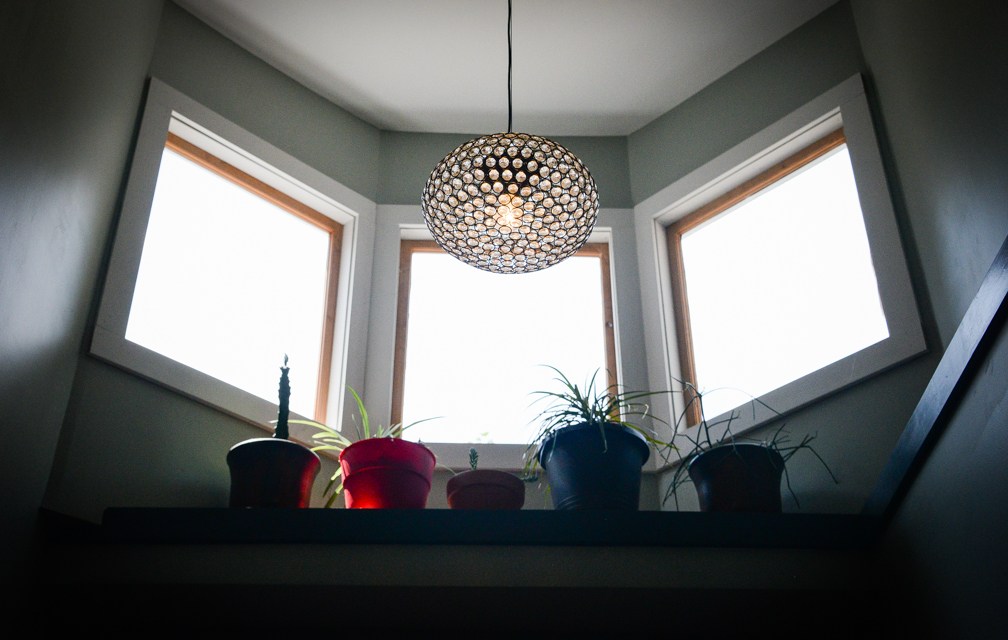 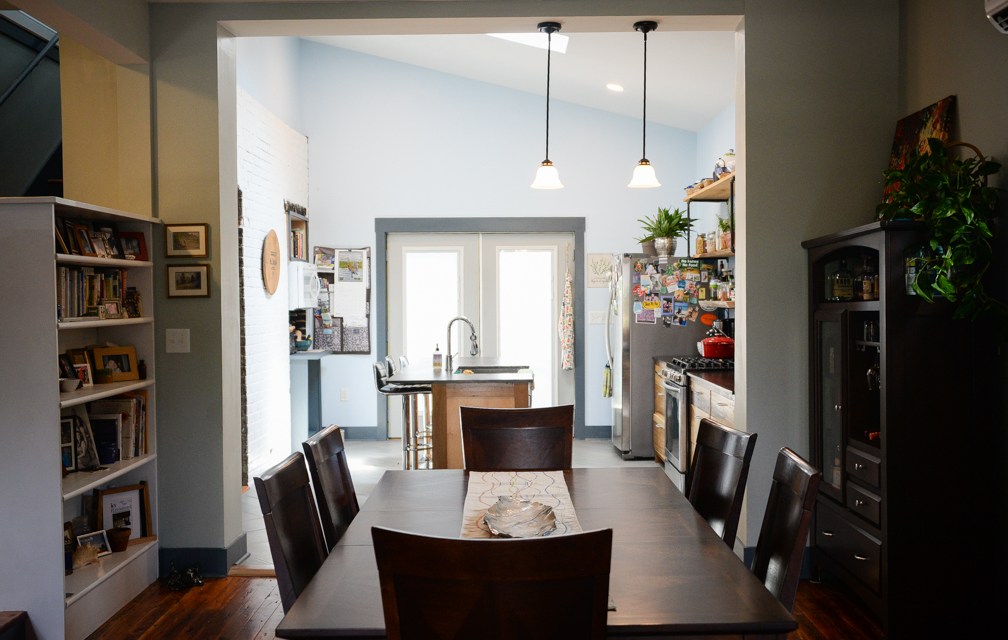 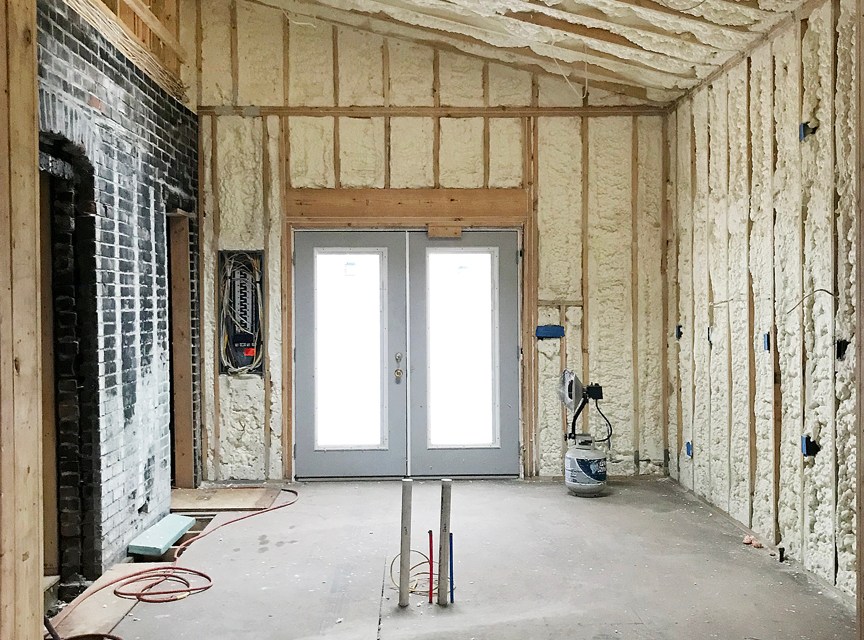 Kevin and Andi Breeck took the boarded-up, charred remains of a property in downtown Frankfort and created the perfect home for them, their son Liam, cat Loki and German shepherd puppy Pearl. It could be likened to a phoenix rising from the ashes.

In 2015, the couple purchased the 113-year-old house that had sat unused and abandoned for years. It was the start of a three year journey to reimagine, rebuild and restore the house. They were finally able to move into their three bedroom, two bath home in May, 2018. The first steps were difficult and involved cleaning out the space while attempting to salvage what they could.

“The house was burned and black and wet, and boarded up when we bought it,” Andi explained. “Once we gutted and filled up 13 construction dumpsters, we had a clear view of the project ahead of us.”

Their home is located on the section of St. Clair Street across the street from where the old Frankfort Convention Center stood. “I’m so hoping there will be a park,” Andi said while looking at the construction zone across the street.

Kevin and Andi, who own KB Construction and Kentucky Awning, had different ideas for restoring the house.

“My vision and Kevin’s vision varied greatly,” Andi said. “We both certainly always had preservation and historical integrity in mind, but I was on the quick and easy path. Restoring the box gutters on the front, adding a second story and 1,000 square feet, as well as opening the turret in the foyer, were all things I thought were unnecessary. Thank goodness Kevin won that argument.”

The couple knew they had their work cut out for them. Originally built as a single-family home, the property had been split into a duplex at some point. “We took it all the way back to the bricks,” Kevin remembers. “Everything was so damaged. When we walked in to the house for the first time, it was pretty scary.”

Because of the poor condition of the house, the Breecks had to start from scratch. The silver lining is that it allowed them the freedom to make changes and update much of the house to meet their needs. They were able to add energy efficient features like, spray foam insulation and heat and air mini units. They restored many of the wood windows. The roofline was adjusted in order to add usable space for the master bedroom and bath on the second floor.

A completely new kitchen is open to the living area and leads to the back deck and yard. The custom poplar cabinetry was created by Kevin and local woodworker Robert Kirkman. “We were able to reuse some of the original poplar in the kitchen,” Kevin explained. “We couldn’t salvage much from the house but we used what we could.”

“Kevin’s hard work and creativity is a true testament to his love of old things and combining those with new elements,” Andi explained. “We get asked all the time if we’re finished yet and the answer in an old house like this is ‘no.’ We have a long list of things we still want to do, such as, adding some kitchen elements, various painting projects, extending the deck and adding awnings in the back.”

Andi remarked, “We enjoy entertaining and the floor plan is really open and easy to do that.” Some of those projects may have to wait because Andi has vowed that she isn’t picking up a paintbrush for at least a year.

Developer and builder Eugene Wallace built the house in 1906. According to Kevin, it’s not particularly historically significant but he remarks, “It’s still here more than a hundred years later. There’s still some research I want to do,” Kevin said. “We haven’t been able to find photos of the house from early on.” Andi and Kevin believe there are two almost identical houses to theirs also built by Wallace, one on Shelby Street and one on Holmes Street.

The Breecks say they wouldn’t want to live anywhere else. Both have lived several other places and gravitated back to Frankfort.

“We love the downtown area. We like to be able to walk or bike. It’s just the most ideal place for us,” Andi said. “We like the history, the river, the people. It’s so diverse.”

The family stays very involved in the community. Liam attends Capital Day School and participates in various local sports programs. “We believe that if there are things for kids to do growing up and they are involved in the community, it will keep them here or get them to come back here to live,” Andi commented. Both Andi and Kevin have family in Frankfort and the surrounding area and are happy to be close to them.

The Breecks have made a conscious decision to live in downtown Frankfort. Their home, situated in the shadow of the Old Capitol, is just blocks from the river and a short walk to downtown. They can even hear the train’s whistle as it lumbers down Broadway.

“We returned this old house back to the community — we love the heart of this great city. We’re just happy that it didn’t get torn down or further neglected,” Andi said. “It’s livable and lovely — we’re proud of it.” 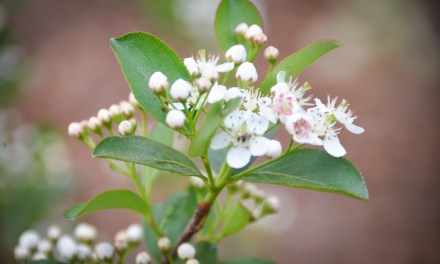 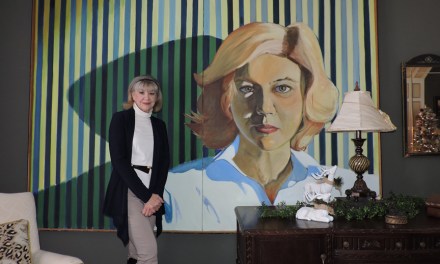 Be An Original – Stories in Art: Finding authenticity through personally collected art 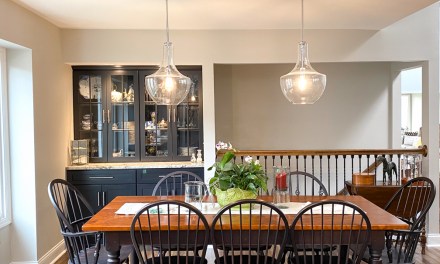 Condo perfection: How an early start on a purchase results in a beautiful new home 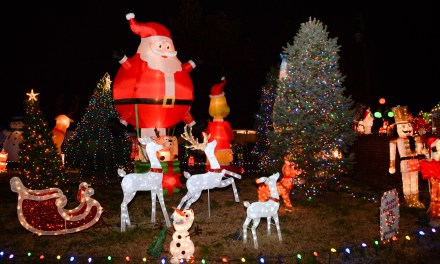 Wooldridges make Christmas special for everyone