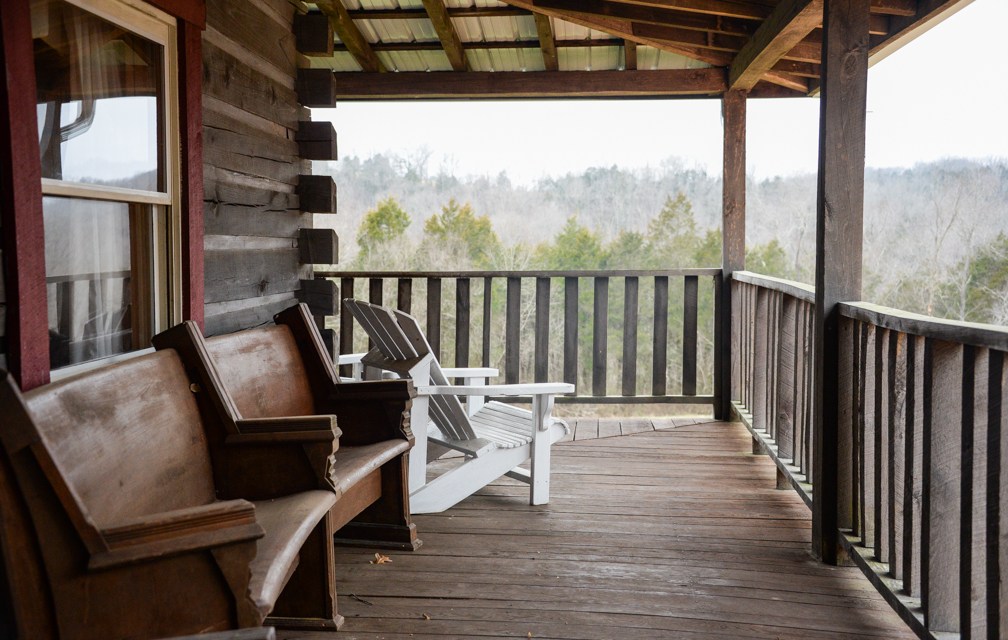 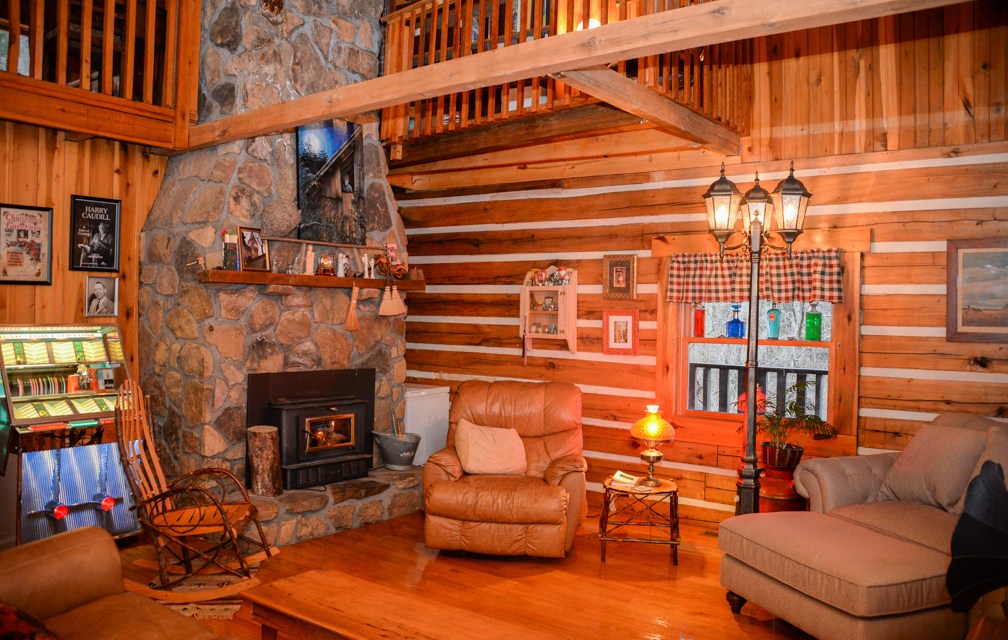 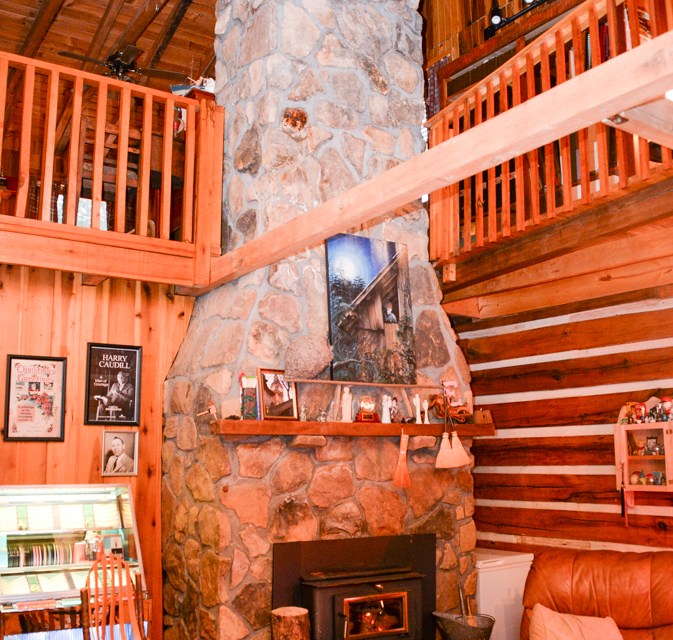 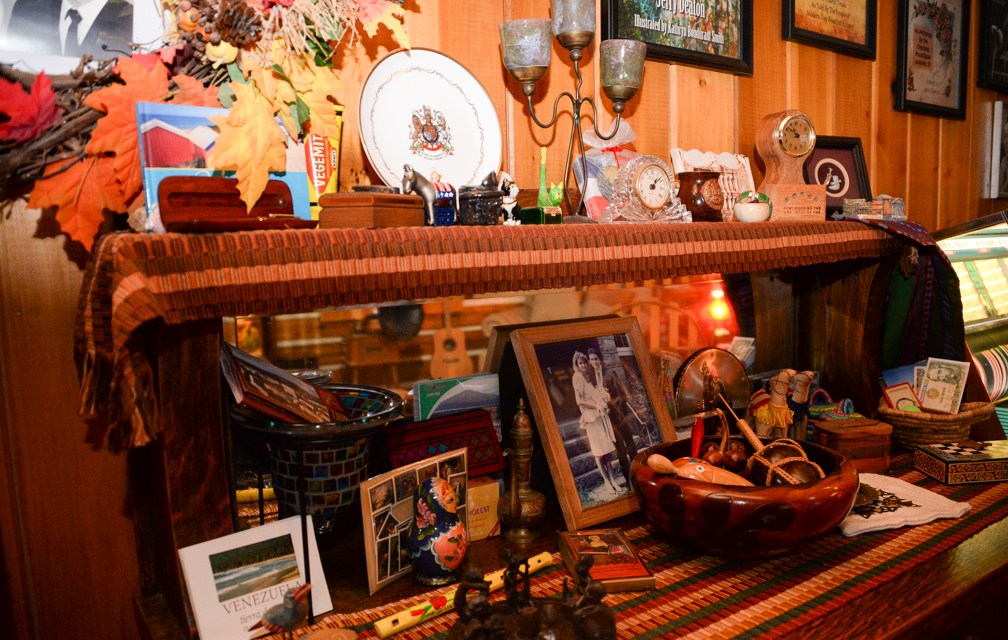 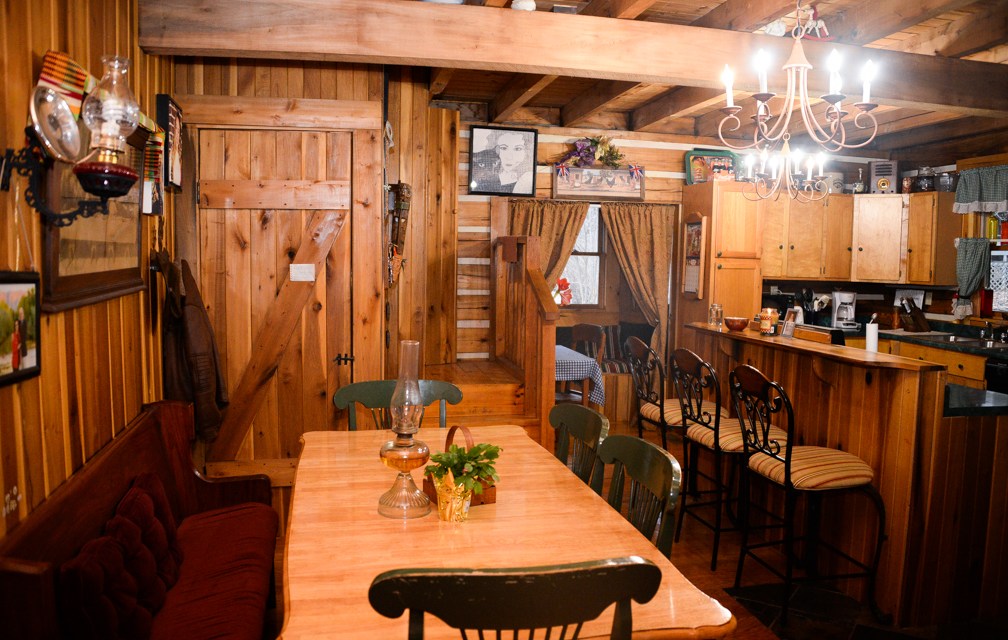 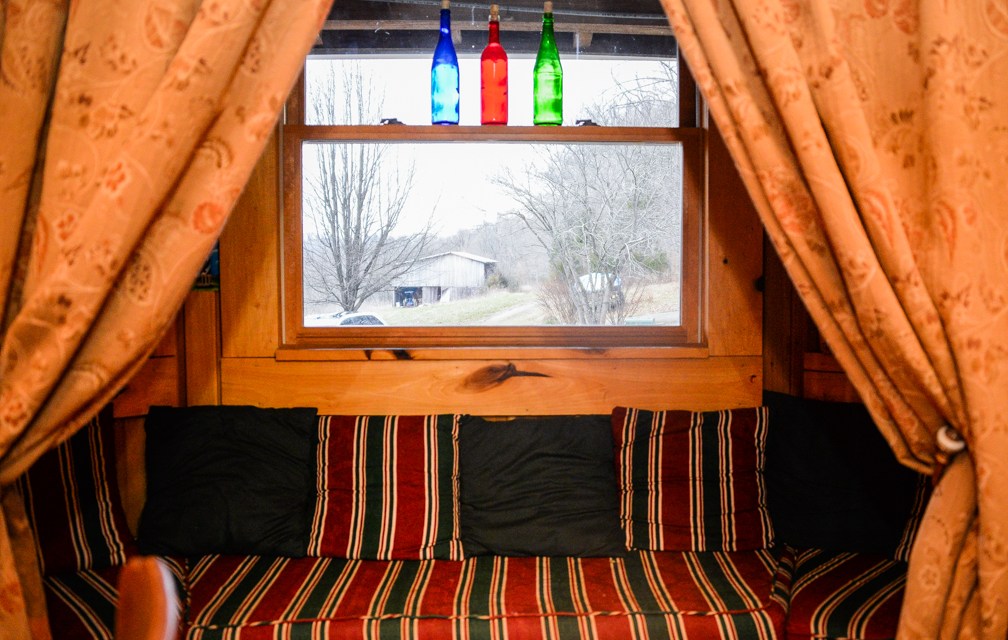 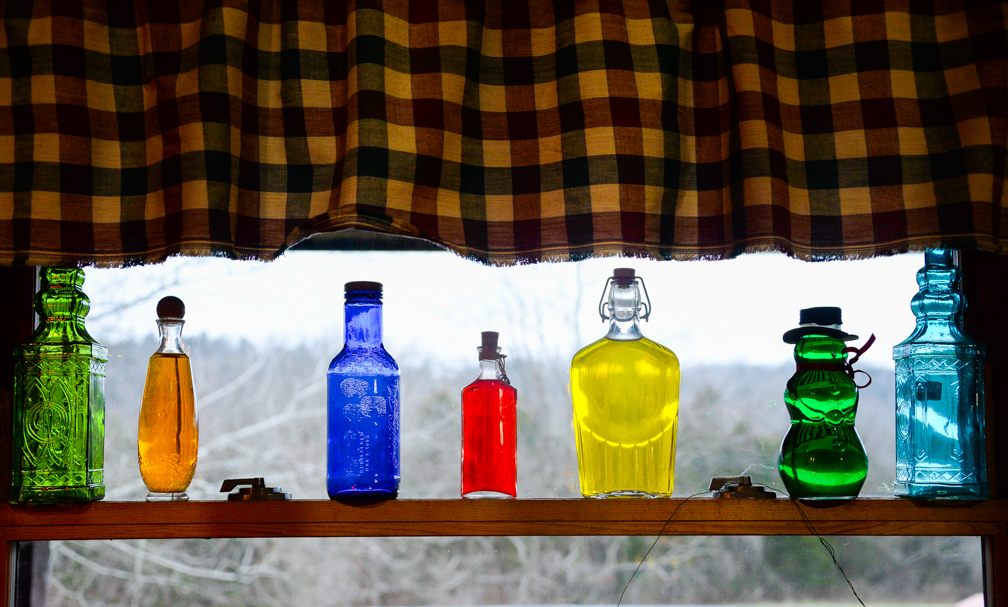 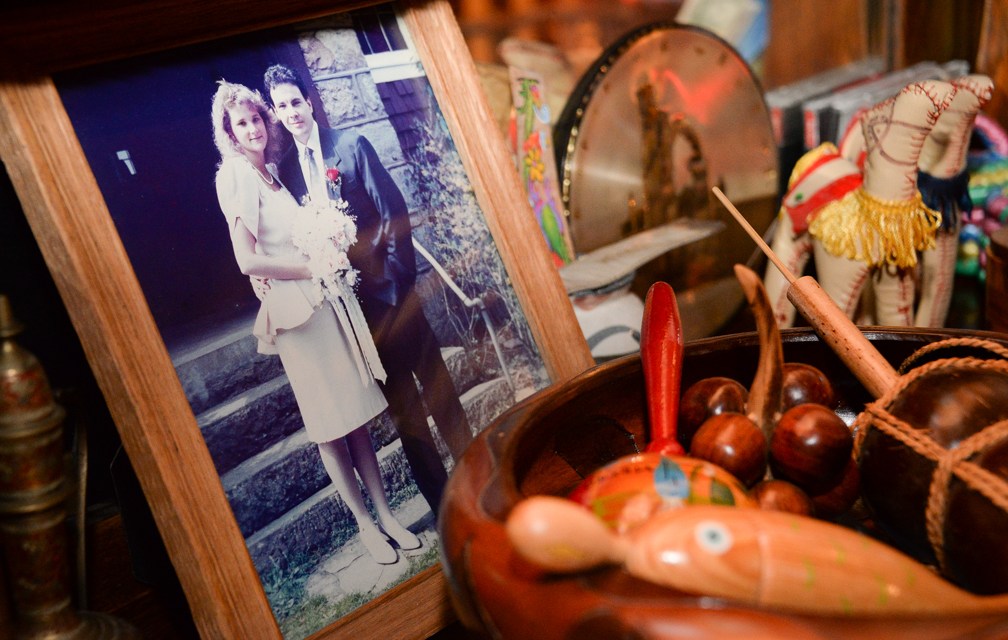 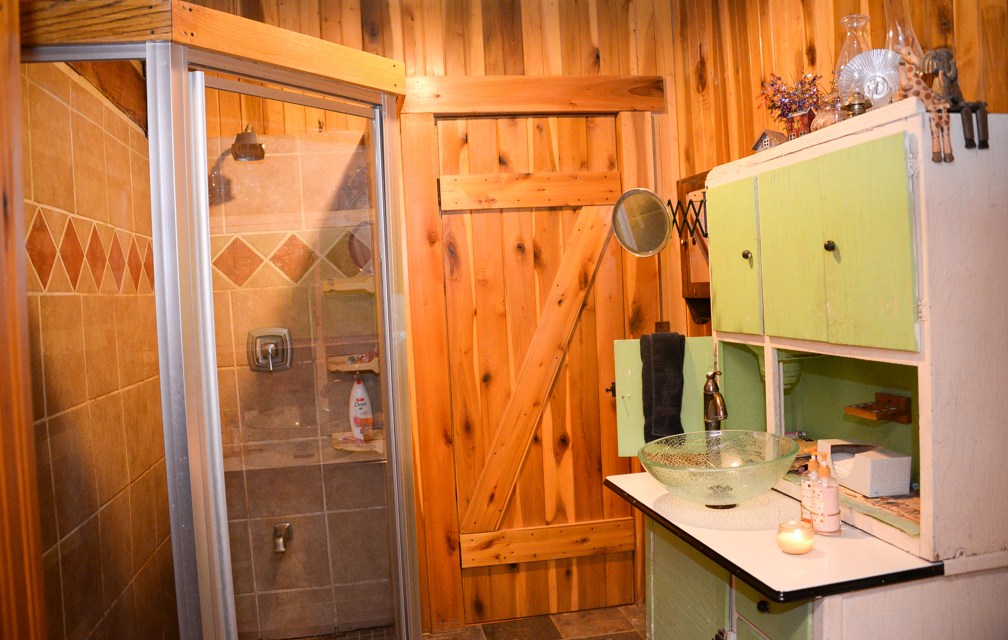 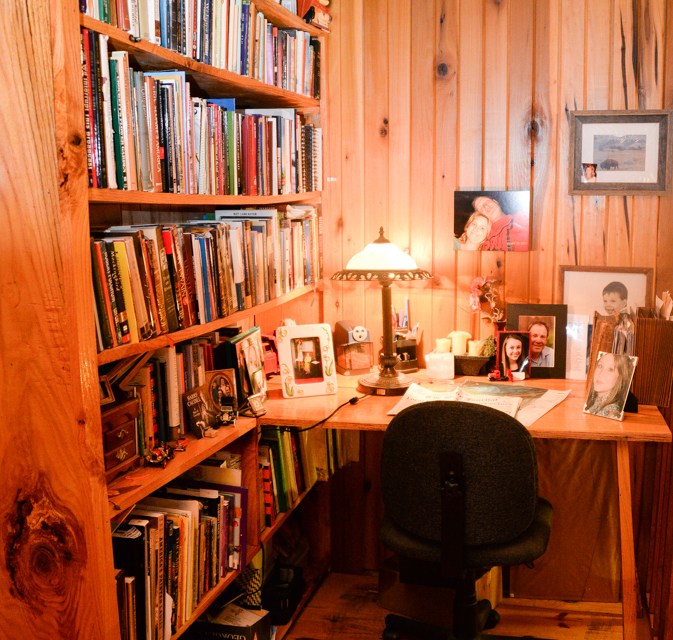 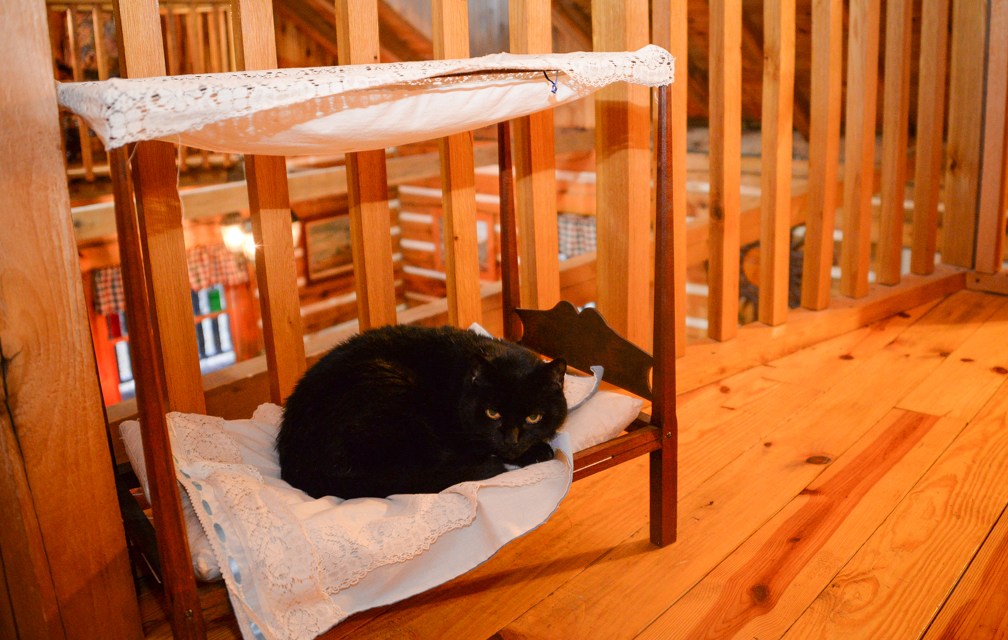 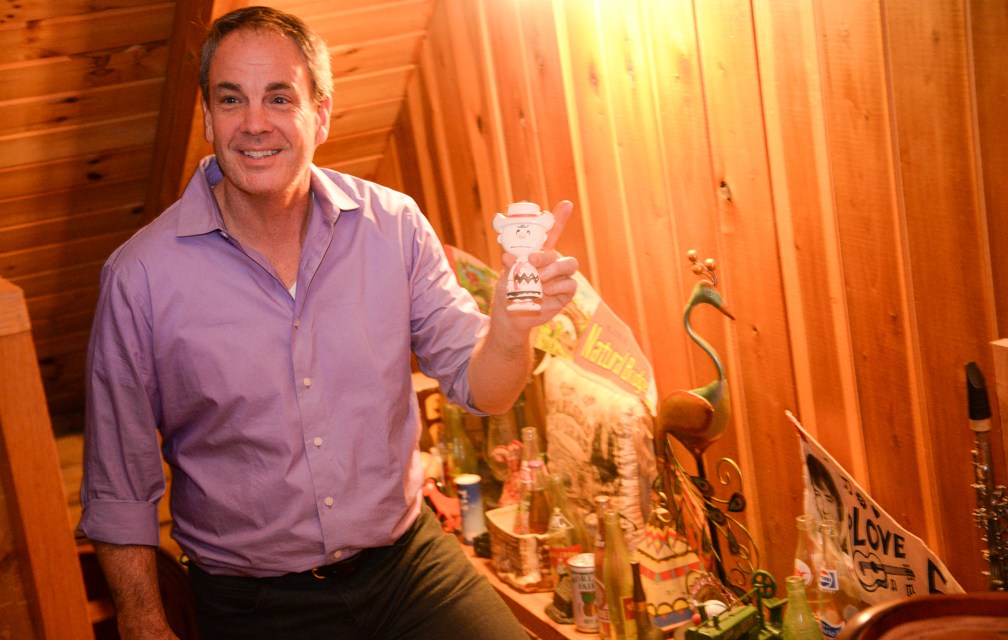 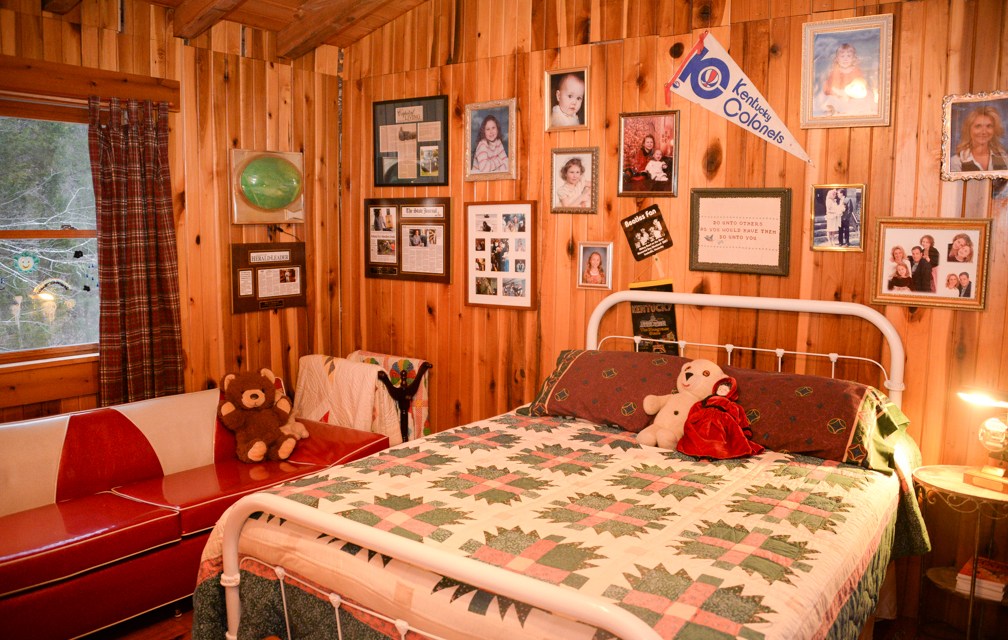 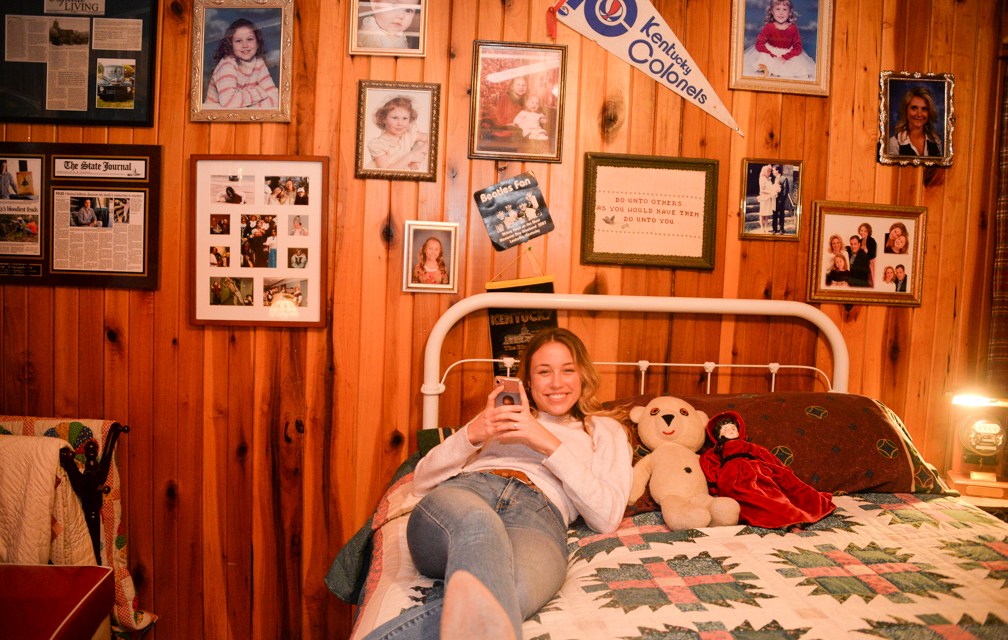 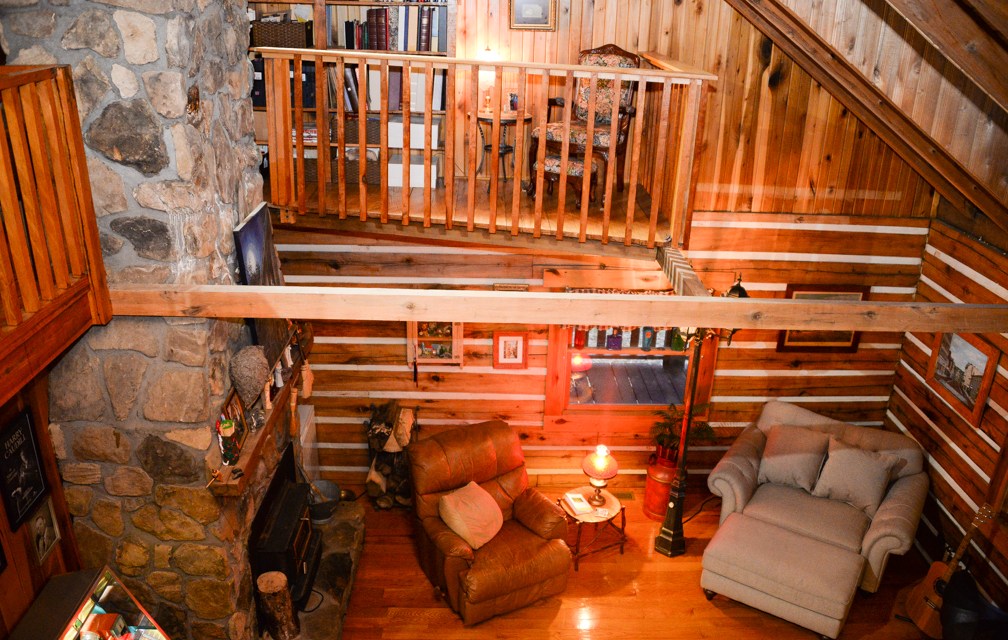 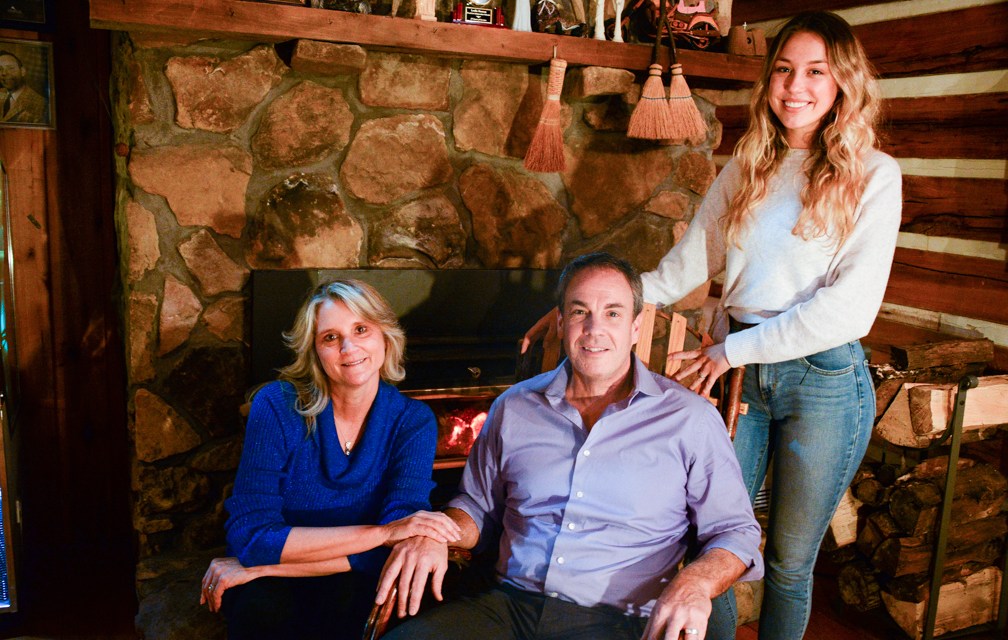 Jerry Deaton has an easy down-home-kind-of-way about him that fits the lifestyle he’s created with his wife, Leslie, for their family in the far reaches of western Franklin County on Pea Ridge Road.

The land where they built their 3,000-square-foot log home was familiar to Jerry, who grew up in Breathitt County. “In 1977,” Jerry explains, “I came out here and cut tobacco for my uncle (Ed Menter). I had no idea this is where I’d spend the rest of my life.”

Fifteen years later, in 1992, the couple was sitting in one of the fields of the same farm on an unseasonably warm day in January and realized that this was where they wanted to live. “So, we asked my uncle and aunt if they’d sell us a piece of the land and they sold us these nine acres,” Jerry says.

It took two years with many hours spent after a full work day and on weekends to complete what they envisioned. “I’d say I did 80 percent of the work on the house along with my dad,” Jerry remarks. “When we started building this house, I had just taken a job in Lexington. I would drive home, eat something and get out here by 6 or 6:30, and work on the house until 10. Then we would work every Saturday and Sunday for eight to 10 hours. My dad came over here almost every time I came.”

Leslie says she was fine with the idea of building on the farm. “I didn’t think it would take so long though! I did anything I could to help out so we could get in here.”

“We had to put the road in and all the utilities,” Jerry remembers. “The logs for the home came from David Spencer. For years David had a set of logs sitting up next to the parkway near Natural Bridge. We passed them and passed them and finally I said, ‘I want to build a log house.’ I drew up the plan using a pencil and a baseball card, David set up the logs in a day and a half and the rest was mine to do.”

Once the Deaton family moved in, they were living a bit off the grid according to Jerry. “We lived out here for seven years before we had a phone or water. I caught the water off of the roof and we had a bag phone,” he said. “One day, I was talking to a congressman while leaning out of a window trying to get a signal. I had like two percent of a bar out here on my ‘Green Acres’ — just trying to function.”

The Deaton’s two daughters, Sophie and Emmie, grew up in the house. Emmie, a student at Western Kentucky University, says she wouldn’t have it any other way. “I feel like growing up here made me who I am. I had to be super creative and we still don’t have WiFi,” she says. “… I grew up reading a lot and writing and being my own best friend. Of course, my friends liked to come out here, too, and I had my older sister Sophie. It was a great place to grow up.”

A house of stories

Their home is situated near a path where stage coaches rumbled through, carrying it’s passengers more than 80 to 100 years ago. Jerry probably would have been right at home trading stories with the travelers, his feet propped up in front of the fire at the old stage coach inn that used to stand on the property.

Jerry, who worked as a lobbyist, is now retired and has undertaken numerous writing and speaking projects. He is a published author, playwright, film producer and speaker with the Humanity Council Speakers Bureau. Posters and playbills from his body of work fill a wall in the living area. He points out several of his projects, including a published book of Christmas stories from his writers’ group in Louisville, his first film on the feuds of Breathitt County, a book of ghost stories and a book called Kentucky Boys, which contains 20 stories about Jerry growing up in the mountains.

From the church pew in the kitchen acquired from First Presbyterian Church to the bathroom outfitted with finds from Smitty’s Junkyard and Wilma’s Linens and Lace, most everything in the Deaton house is there for a reason — with a story. “I like meaningful stuff,” Jerry explains.

A ledge alongside the staircase holds memorabilia from their lives, including a Charlie Brown brush and a tribute to Elvis because Leslie says she loved him growing up. In the living area, there’s a jukebox that they “just had to have” from a place in Jamestown, a street light because Jerry always wanted one and an aquarium crafted from his grandmother’s first television. “I’ve had that TV since I had my first little apartment on Watson Court,” he said.

Jerry describes their style as “early cluttered” or “a hodgepodge of stuff,” but it works in their home — especially when hearing the stories that earned each item of decor a place of honor. Carefully situated on a long side table are gifts and mementos given by the many visitors to the Deaton home, including a can of Vegemite from an Australian guest. “We’ve had people from 37 countries in this house,” Jerry remarks while showing the gifts.

On the opposite wall is a row of colorful bottles sitting in the windows. “I love color, and usually in the evening when the sun sets right there, it’s just gorgeous color bouncing off of those bottles,” Jerry said.

A focal point of the room is a two-story stone fireplace that rises to the loft above. “I picked every rock used in the fireplace from a creek I grew up playing in out at the Miller Ranch in Breathitt County,” Jerry says. “I put them in my old ’78 Chevrolet pickup that only had rear brakes. I got right in front of the armory (on East Main Street) and I saw two motorcycles sitting at the light at the bridge. I started hitting my brakes and nothing happened … I was carrying 10 tons of rock, so my only plan was that I was going to have to put it in the river. Thankfully, the light turned green and the motorcycles went on and I rolled on through.”

Jerry and Leslie Deaton have created a special place that suits them well. If you ever happen to find your way up a rather precarious gravel road leading to a log home off of Old U.S. 60, set a spell with them on their wrap around porch and enjoy the quiet of the country — and maybe a story or two by Jerry. 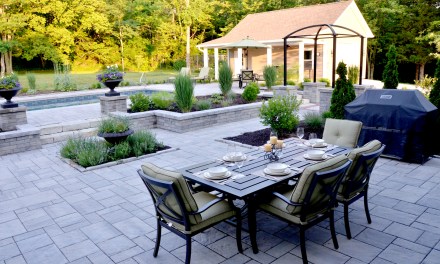 Take the plunge — but hire a designer first! 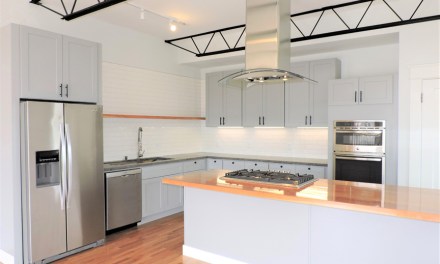 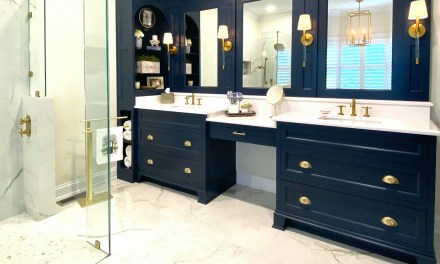 The painted ladies of Frankfort: UrbanWoods Apartments and Airbnbs making a statement