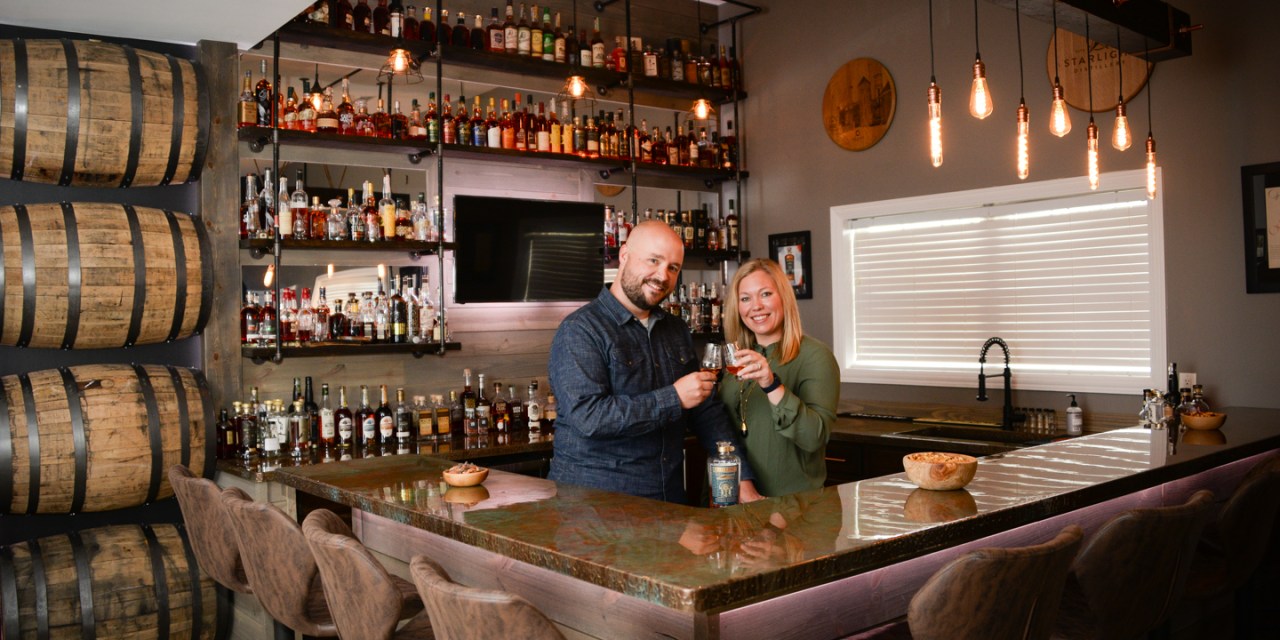 Like many bourbon enthusiasts, Logan and Mackenzie (Mac) Hanes enjoy collecting bourbon. But, even more than acquiring interesting and rare bottles of bourbon, the couple enjoys collecting and telling the stories that surround each bottle.

Logan and Mac discovered their love of bourbon more than 10 years ago when they moved to Frankfort from Western Kentucky.

“When you move to central Kentucky, you have two options — bourbon or horses,” Logan said, smiling. “Mac wouldn’t let me have a horse so, when family and friends come to visit, we take them on distillery tours. We’ve always loved the stories and the history.

Logan began working as a Buffalo Trace Distillery tour guide as a hobby in 2015. “I loved working there, telling the stories of the barrels and their makers,” Logan commented. “I learned a lot and, in 2017, even had the opportunity to join the tasting panel.”

Logan and Mac were able to realize their dream of building a custom home bar after purchasing their east-end home in 2019. “The basement was a blank canvas with 12-foot ceilings and rough-ins for plumbing,” Mac said. “Logan used to be a contractor and a certified kitchen designer, so he already had it pictured in his mind. We were excited knowing we could create the bar we wanted so we could entertain family and friends.”

Constructing the wall of shelves to hold their extensive bourbon collection was the first order of business. The open shelving features wrought iron and hidden LED lighting, making each bottle sparkle. It’s as if each bottle is waiting to have a story told about it.

Throughout the area, Logan and Mac used copper accents as a nod to Buffalo Trace’s heritage. (Col. E. H. Taylor Jr. bought the distillery in 1870 and christened it with the name of O.F.C., standing for Old Fire Copper or possibly Old Fashion Copper.)

The “L-shaped” bar, often used for gatherings, classes and tastings, faces the shelves of bourbon. “We wanted a copper patina-look to the bar counter so we found this product that is five different colors of spray paint mixed in with an epoxy,” Logan explained. “As it’s drying you drum it with your fingers to give it a hammered look.”

The DIY project was completed just months before the pandemic started. “It was ideal that we finished the bar part of the project in Jan. 2020, because we had this great bar where Mac and I would set up our computers every day at home,” Logan said. Mac is the director of student success at Midway University and Logan is the executive director of Kentucky Manufactured Housing Institute.

Originally, the Hanes’ plan was just to create a home bar. But Logan realized along the way that he needed to add something more to the design. “Having worked at Buffalo Trace, even as a hobby, I fell in love with it,” he explained. “My favorite thing in the world was walking into Warehouse C, which is the original 1885 warehouse to the distillery. I just wanted that same feeling when we walked down the stairs.” That feeling led to the idea for the rickhouse (which is a storage room for barrels) design being added at the bottom of the basement staircase.

Logan said the most challenging design aspect of the entire project was figuring out how to get a round barrel to hang on a flat wall. He found the answer was to cut the barrels in half. The 14 half barrels are mounted and backlit as you enter the basement, giving the impression of a rickhouse.

“As we were building the bar, I was posting progress pictures on a Bourbon Facebook group page,” Logan said. “People went crazy, telling us we needed to start an Instagram account and get on TikTok.

“We finished the bar in early May 2021 and decided to host a mixology class. We hired a mixologist and had cocktail tables set up. It looked cool down there so I figured out how to record a video walking down the stairs, panning the bar and that was it. I didn’t say anything in it; you didn’t see us in it. I uploaded it to TikTok that night, went to bed and forgot about it. Mac didn’t even know I did it. The next morning, I pulled it up and we had 100,000 views on it!”

That was the beginning of their “side business,” the Basement Rickhouse. Mac and Logan began telling one to three minute bourbon stories on social media and they say it just took off. The clips are short, informative and often explore little known facts about the history, background and people in the world of bourbon. Mac even does a series called Women in Whiskey.

“We’ve been on social media about a year and we have almost 50,000 subscribers and 12 million views,” Logan said. “We still have fulltime day jobs and are the parents of two small kids. If you’d told us 13 months ago that we would have a TikTok account, period, we would’ve laughed, let alone partnering with distilleries and doing things like tastings for HGTV’s Home Town.”

They also feel strongly about helping the local community. Recently, the couple participated in the Franklin County Humane Society fundraising campaign to raise money for a new animal shelter. They posted videos on TikTok telling their subscribers and viewers about the rare bourbon bottle raffle that ultimately raised almost $300,000 toward the building of the shelter.

“We want to make bourbon approachable again and have fun,” Mac added. “We want to make sure that we are sharing the information in a way that makes people feel comfortable and can ask questions when they’re exploring bourbon products and it’s history. We find that the people who visit the Basement Rickhouse are really interested less about the product they are drinking and more about hearing a story they don’t know.”

Bringing bourbon stories to the world

Frankfort has become home to the Hanes family. “We’re not going anywhere. We love everything about Frankfort,” Mac commented. “Right now it’s growing so much with new restaurants and breweries. That’s been so great for us. We have all kinds of people coming in to take our classes or who have met us through TikTok. So, now we keep a list of restaurants and places for them to visit while they’re here.”

With TikTok and other social media, the Basement Rickhouse has been able to bring people from all around the world to Frankfort and to Kentucky. “Yes, there’s a Bourbon Trail, but so many people don’t have the means to come here,” Logan explained. “So, if we can highlight what is our home — not just what is our actual home in the basement — but our home in Frankfort and central Kentucky through this business, then I think that is a good goal.” 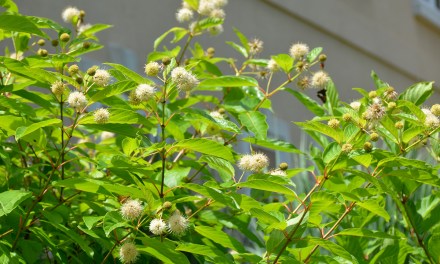 Why the natives are restless

Holiday decorating: A labor of love 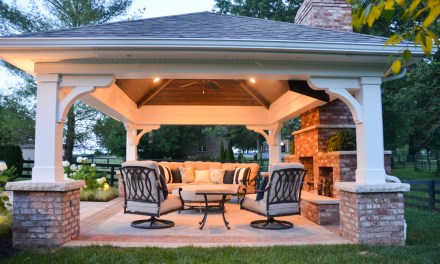 Seeking out shade: Pergola or pavilion might help provide a cool spot this summer 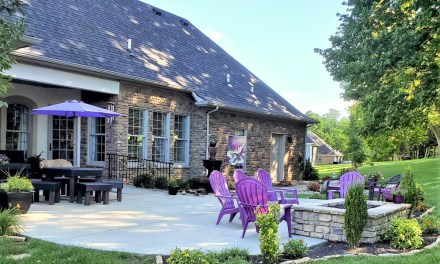